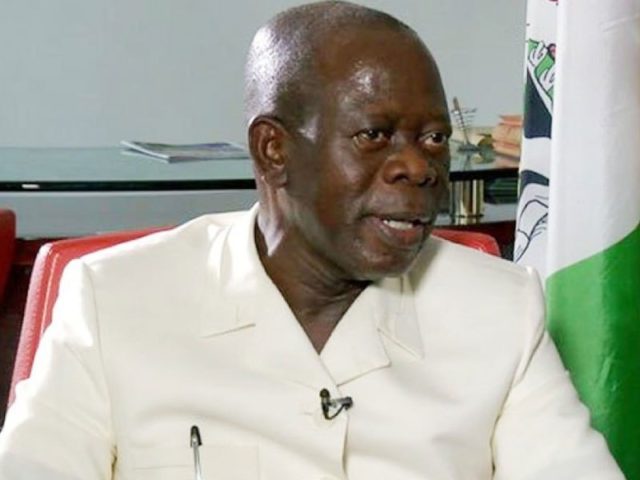 The Director-General of the Progressive Governors Forum PGF, Salihu Mohammed Lukman has decried the political situation in Edo state, lamenting that being a mentee of the National Chairman of the ruling All Progressives Congress APC, Comrade Adams Oshiomhole, it is depressing for him to witness the party leader being reduced to a local champion by the state Governor, Mr Godwin Obaseki.
Consequently, he said the way forward is for the APC National Chairman to convene a meeting of the National Executive Committee NEC or resign honourably.
Lukman also described the National Working Committee NWC as a shadow of itself, saying it has lost many of its members and yet has refused to replace them. The PGF is a platform for all governors of the ruling APC
It is very painful for many of us who have had the privilege of being mentored by Comrade Oshiomhole to see him being devalued to a local factional leader from a very high pedestal of an illustrious national leader. As National Chairman, Comrade Oshiomhole hardly appreciates that he now has a national constituency and not just a state constituency, which may have been responsible for his apparent intemperance in the handling of matters affecting Edo State. I wish he paid similar attention to the handling of issues affecting Rivers and Zamfara states during the 2019 elections”, he said.

In a statement titled, “APC and our Inconceivable Organisational Challenges: Urgent Call to our Leaders”, Lukman also warned that the disqualification of the party’s deputy governorship candidate in Bayelsa state could spell doom for it and deliver the state on a platter to the Peoples Democratic Party PDP as witnessed in Zamfara, Rivers and other states.

According to Lukman, every necessary step has to be taken to vacate the judgment in order to ensure APC’s participation in the polls.

Instead of focusing on working to win elections, we are busy undermining ourselves. All these are ominous signs that we are about to re-enact the Zamfara, Rivers, Bauchi and Adamawa experiences in Bayelsa. It is Bayelsa today, Anambra, Edo, and Ondo are being set up for similar experiences

Lukman also expressed concerns at the inability of the APC National Executive Committee NEC to resolve most of the issues afflicting the party, saying it would appear that the Comrade Oshiomhole-led National Working Committee NWC has usurped the powers of the NEC.

“Somehow, unfortunately, the National Executive Committee NEC of the party, which is the organ vested with the statutory responsibility of responding to all these challenges appear to be suspended. The last time it met was August 2018. In its place, the National Working Committee NWC, which is an administrative organ with the responsibility of implementing decisions of NEC and other higher organs seems to have usurped the powers of NEC

Sadly, even the NWC, as at today, is a shadow of itself, as it has lost many members either on accounts of appointment into government or controversial suspension. For instance, Otunba Niyi Adebayo, Deputy National Chairman (South) is today a Minister of the Federal Republic. Sen. Lawal Shuaibu, Deputy National Chairman (North) is allegedly suspended. Alh. Inuwa Abdulkadir, National Vice Chairman (North West) is similarly suspended.

“We may recall that in June 2019, the NWC allegedly suspended Governor Rotimi Akeredolu SAN. During the 2019 general elections, on accounts of the roles of former Governors Rochas Okorocha and Ibikunle Amosun against the candidates of the party, they were similarly suspended. Whether all these actions are permissible by provisions of the APC’s constitution is highly contestable.

“Why should all these be allowed to happen? Why is it impossible to convene a NEC or even National Caucus meetings, which are supposed to hold every quarter to resolve all these issues? Why should the NWC under Comrade Oshiomhole continue to imagine that it can conduct affairs of the party without mandatory meetings of party organs? What legacy is Comrade Oshiomhole hoping to achieve as a National Chairman by running the party in a way that suggests almost zero commitment to issues of party development?

In the current circumstance, nothing short of a NEC or National Caucus meeting of the party can resolve all our increasing organizational challenges as a party. It is either Comrade Oshiomhole respects the provisions of the party constitution and convene a superior organ meeting to deliberate on all our challenges, or he should just accept his inability to manage the party and simply resign.

“Our national leaders must rise to the challenge facing us as a party and take all necessary measures to convene superior organ meetings to begin to resolve all our challenges as a party. The current public disgrace must end!”, he declared.