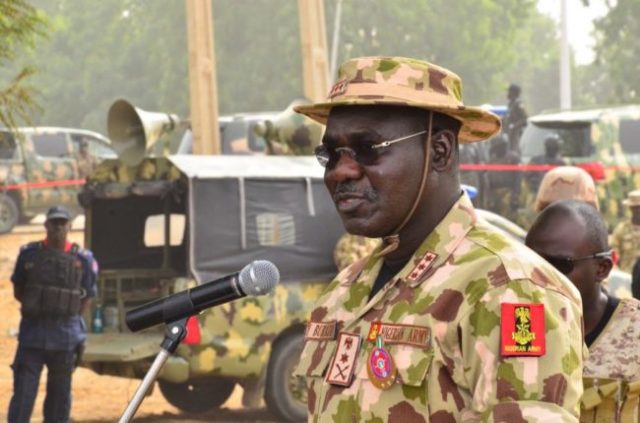 The Nigerian Army said it has commenced the reconstruction of Kuru Muhammad Barracks in Bama, Borno State which was overran by the Boko Haram terrorists.

insurgents overran the barracks at the peak of insurgency in the North East in 2014.

The terrorists occupation of the barrack led to the destruction of the building and critical infrastructure.

The Nigerian troops retook the barracks in 2015 almost a year after.

The Chief of Army Staff, Lt.-Gen. Tukur Buratai, who visited the barracks on Tuesday to inspect the level of work, expressed satisfaction and urged them to redouble their efforts.

He was briefed by the Brigade Commander, 21 Special Armoured Brigade, Brig.-Gen. Saidu Audu, on the level of work.

NAN reports that a number of blocks of flats have been completed.

Buratai also inspected the Nigerian Army Aviation Base Station under construction in Bama to see the progress of work.

He also visited troops in 122 Battalion, Konduga also in Borno where he commended the troops for the recent successes against the insurgents in Sambisa forest.

He urged them to ensure that the terrorists remained defeated.

Buratai assured them of better motivation in the coming year in terms of equipment and welfare for them and their families.

“Let me congratulate you on the successes from the operations you recently carried out in Sambisa and when next you meet them, do not spare anybody, clear them completely.”

The Chief of Army Staff also visited the Amphibious Forces at Allo Dam in the outskirts of Konduga in Borno.