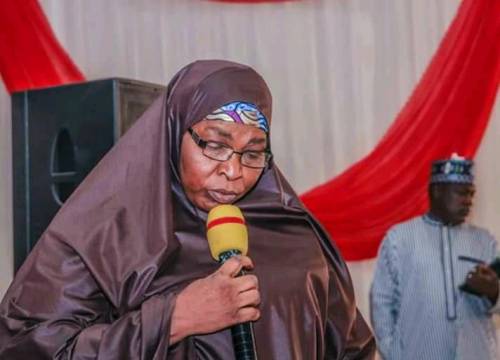 The activists who spoke to THE FINDER said the government’s response has exposed its “actual commitment” to the fight against corruption.

THE FINDER on 17 exposed how Mrs Tarfa, who was appointed in acting capacity of the board in breach of public procurement act awarded contract of 16million naira to her own company without recourse to the state procurement law.

Some Nigerians, including civil society organisation, had called for the sack or resignation of Mrs Tarfa.

More than one week after the scandal broke; the acting chairperson in the eye of the storm has refused to respond to the allegations.

And the Adamawa state government continues to maintain sealed lips.

On Sunday, the centre for leadership evaluation and accountability forum  urged Mrs Tarfa to “without further delay show responsibility and clear the air over the damaging 16 million naira finanical  allegations against her and settle the facts of the case once and for all.”

According to CLEAF, suspicions of 16 million naira fraud involving a member of the Fintiri’s government if not urgently and satisfactorily addressed would weaken public trust in the government’s oft-expressed commitment to transparency and accountability.

“Clarifying the allegations of breach of the state public procurement act would show a commitment to doing the right thing, and a natural disposition toward openness,” the group said in a statement by its deputy director, Mapida Ikurnyi.

“The continuing failure and/or refusal to speak to Nigerians on these allegations amounts to a betrayal of public trust. If she can show the courage to clear the air on the allegations, Mrs Tarfa can be a strong promoter of the values of transparency and accountability, something which the government of Gov. Fintiri has regularly expressed commitment to embrace and achieve.”

Mr Ikwurnyi said the failure to address the allegations could create public anger and lead to accusations of a cover-up.

“The public can become passive and cynical if it believes that people in a position of public trust are out for themselves,” he said.

Luka Ibrahim, the chairman Adamawa first initiative, said the chairperson’s silence is an admission of guilt.

“It also tells you there is a whole plan already going on both within the government – at least you can see by extension that the government is culpable as far as it is – to try and find a way to either manipulate the whole situation or cover up the whole mess or possibly consulting legal persons who can give the government some legal excuses or escapes for the woman under the current circumstances.

“It is clear the fact that she is guilty as she is already charged. It is clear that the government as it is is also shameless in condoning people with such shady character and background. It is also undermining the whole integrity of the whole system and the government.”

Mr Ibrahim said it is a “major blight” to the state government’s anti-corruption efforts that a person with the status of the chairperson of a board in Adamawa would be connected with breaching of the state procurement law by awarding 16million naira contract to her company.

“Beyond the state, the Nigerians and international community will be watching and observing how the government will respond to this situation and I’m sure by now they would have been disappointed by the failure of the government to respond to this issue or to come out with an official statement under the circumstances.

“As a matter of fact, those holding the government in high esteem will definitely also be reducing that respect based on how they have handled this issue and I don’t think the government will be able to follow the backlash that will follow.”

He said the scandal has exposed the “hypocrisy and the deception of a regime that has nothing to offer.”