Fintiri led government in Adamawa was foot dragging on the implementation of the new minimum wage in Adamawa prior to the outbreak of corona virus in Nigeria.

But the governor in a statement signed by his media aide, Solomon Kummangar said the state government could not implement the new minimum wage due to outbreak of corona virus, however the governor promised to pay immediately the virus is curtail. 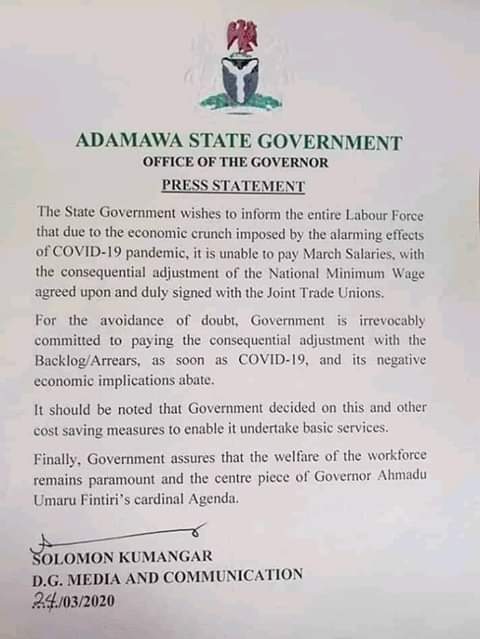 Reacting, the chairman, Adamawa first initiative, Ibrahim luka has condemn in strong term finitiri’s claim for not paying minimum wage to workers, “we see no reason why Fintiri should not pay minimum wage in Adamawa due to corona virus, currently there is no capital project being executed by the Fintiri led government in Adamawa apart from the Bachure road that is not up to three kilometres.

“How can he claim he can’t pay the minimum wage due to corona virus, we are calling on labour leaders to mobilise and shut down the state economy as this is nothing but wickedness on the part of government that promised workers “fresh air”.