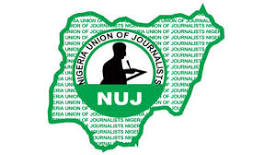 Police has invaded the press centre of Adamawa State office of Nigerian Union of Journalists, in Yola.

The Police men who arrived at the arena located on Kashim Ibrahim way, Jimeta in Hilux vehicles with stern-looking policemen, said they had information that Journalists in Adamawa refused to observe the sit at home order imposed on the state by Gov. Fintiri.

The police men after ransacking the NUJ premises arrest beat up some Journalists on sight at the center.

The invaders were said to have met only the operators of the bar and other staff of the centre and some journalists.

When contacted over the invasion, the state Commissioner of Police, Madaki, said he was not aware of it as he did not give such order. He promised to investigate the matter.

Meanwhile, the leadership of the NUJ has condemned in strong terms, the invasion of their union office while they were answering the call of duty.

The NUJ has called for an emergency meeting of its members to decide on the next line of action.