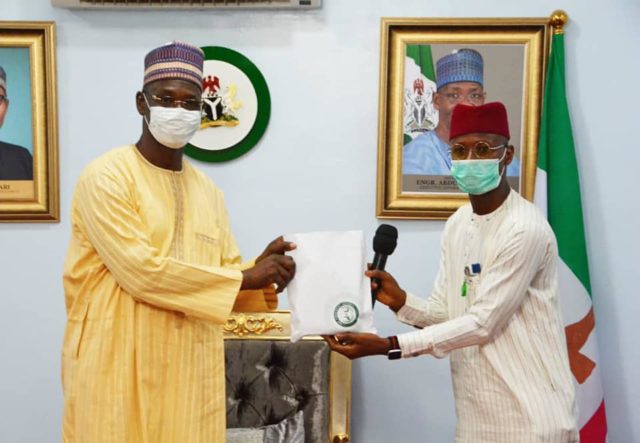 In its bid to combat the spread of Coronavirus, the Nasarawa State Government said work has already commenced to convert the hostels built to accommodate displaced flood victims, located in Shabu, Lafia North Development Area, into a 300-bed isolation centre.
Nasarawa State Governor, Engineer Abdullahi Sule, disclosed this while hosting officials of the Nasarawa State Students Association (NASSA), who were at the Government House, on a courtesy call, on Tuesday.
Engineer Sule said even though the state is yet to record any case of COVID-19, still there is every need to prepare for any eventuality, especially with the state’s proximity to Abuja, which has continued to record more cases of Coronavirus.
The Governor re-emphasized that his administration will continue to put in its best to protect the people of the state, stressing that most of the measures so far taken, were not meant to add any hardship to the citizens.
“Yesterday, we started our work on the 300-bed isolation centre that we are opening up in Shabu.
“We are trying to pray for the best, but to prepare for the worst. That is our situation in Nasarawa State. We are trying to ensure that the only way we can protect our people, is by preparing for any eventuality. While praying that that eventuality will not come,” he said.
Commenting on the additional measures taken to protect the border between Nasarawa and the Federal Capital Territory (FCT), Engineer Sule said he has interacted with the FCT Minister, head of the military, as well as the Chairman, Federal Government Committee on COVID-19, aimed at improved level of security at the border area, in Nyanya.
He disclosed plans to distribute food packs to over 4000 households across the state, under the Federal Government School Feeding programme.
“The FG has already concluded arrangement to send beans, rice and other items, in a pack, that will be distributed to over 4000 households in the state. What we are doing at the moment is the logistics and the support to make sure that all those food items will go door-to-door, to every benefiting household,” Engineer Sule stated.
The Governor further disclosed that having realised that some communities in Karu, which is under total locked down, are experiencing challenges getting drinking water, the state government has started distributing water in such affected communities, pending the arrival of food items procured by the state, also for onward distribution.
Speaking on the donation by NASSA, Engineer Sule commended the students for the show of love, patriotism, as well as their ability to make sacrifice.
He disclosed that an investor, operating in Uke, Mr. Tayo Tunji has equally donated N20m to support government efforts to combat the spread of the pandemic, assuring that all donations will go into the COVID-19 account.
Speaking earlier, NASSA President, Comrade Faruk Tunga, said they were at the Government House to make their donation in support of government’s fight against the spread of COVID-19.
The NASSA announced a total donation of N200, 000 worth of precautionary gears, as well as N100, 000 cash.