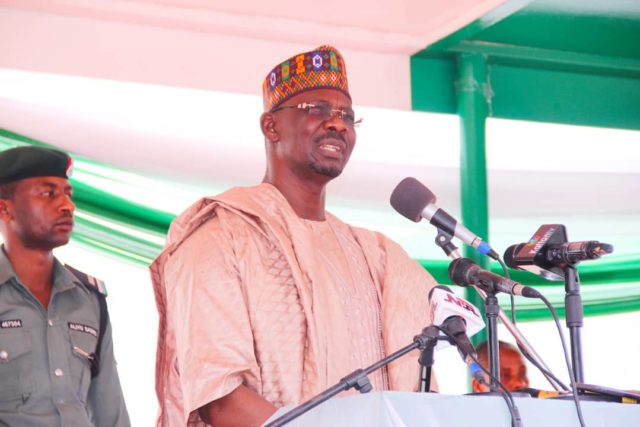 Some local government areas in Nasarawa State were not able to pay salaries of workers in full for the month of March, mostly because of the economic challenges posed by the outbreak of the COVID-19 pandemic.
Nasarawa State Governor, Engineer Abdullahi Sule disclosed this while hosting officials of the Nasarawa State Students Association (NASSA), who were at the Government House, on a courtesy call, on Tuesday.
Engineer Sule said even though the state government was able to pay its workers in full, as well as pensioners, some local government areas were only able to pay their workers in percentages because the lack resources to pay full salaries.
The Governor pointed out that he didn’t earlier comment on the issue as respect for the autonomy the councils presently enjoy, but needed to clear the air regarding the matter.
“Because I didn’t say anything about it, because the LGAs are autonomous, a lot of people didn’t get to understand what is happening.
“At the state level we have paid workers one hundred percent of their salaries, one hundred percent of their pension, irrespective of the challenges we are facing. But because of the autonomy, a lot of the LGAs were not able to pay 100 percent of salaries,” he explained.
The Governor however stated that the state government has for the past three or four months, being assisting the local governments to pay full salaries, but could not do so for the month of March because there was no additional resources left to assist the councils.
Engineer Sule promised to monitor the situation, with a view to finding out what actually happened.
While expressing satisfaction over the ability of the councils to pay workers salaries, in spite of the challenges, the Governor assured LG workers that government will definitely look into the matter.
Recall that following the outbreak of the dreaded Coronavirus pandemic globally, oil prices fell below $30, which has negatively affected the economy of the country and Nasarawa State in particular, leading to shortfalls in revenues.