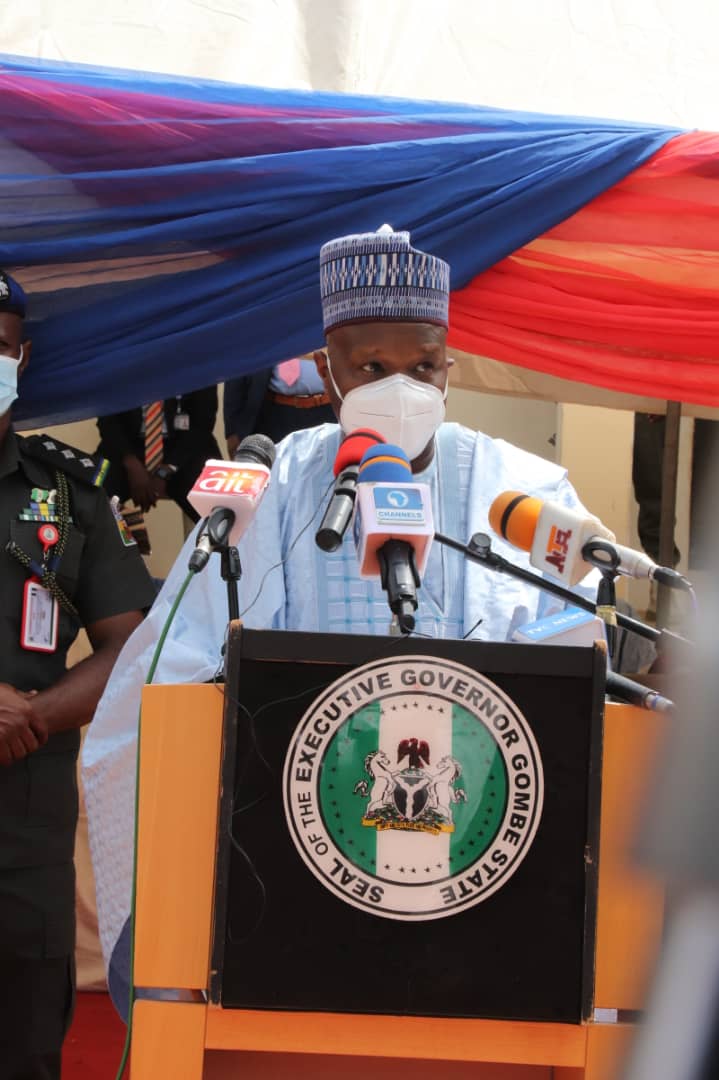 In a bid to boost agricultural production in the state, Governor Muhammadu Inuwa Yahaya has flagged- off sales and distribution of fertilizer for the year 2020 farming season.

While performing the ceremony in Gombe, Governor Yahaya said timely distrbution of affordable fertilizer to farmers each cropping season is one of his campaign promises as such his administration remains committed to keeping faith with its resolve to boost agricultural activities in the state.

He said his administration has procured 20,000 metric tons of assorted fertilizer for sales and distribution to the door steps of real farmers at the hinterland in good time despite the challenges posed by the covid-19 pandemic.

The Governor further revealed at the flagging-off ceremony that the large quantity of the commodity has already been supplied directly to the Agricultural storage facilities across the eleven (11) local government areas of the state for onward sales and distribution.

The Governor directed that the NPK fertilizer be sold at the rate of N5000 per bag adding that price of other brands like Urea will be determined when security related issues are sorted out with the office of the National Security Adviser.

“Gombe State has procured 20,000 metric tons of assorted fertilizers for sale to our farmers. This is a clear testimony of our commitment to improve agricultural production in the state”

“Building on our previous experience, the bulk of it has been supplied directly to the Local Governments for onward sale and distribution through the polling units so as to reach the grassroots.

” Our objective is to ensure that our rural farmers are supplied all the basic farm inputs at their doorsteps without necessarily going through bureaucratic or economic red-tapism associated with the past”.

He explained that the government has set up a fertilizer monitoring committee with other relevant security agencies to monitor and track diversion of the commodity.

While calling for harmonious relationship among farmers and herders against encroaching into grazing reserves and cattle routes, the Governor said the state is keying into the National Livestock Transformation Programme, with Wawa-Zange grazing reserve as pilot project as well as tapping into the great irrigation potentials of the state’s three major dams of Dadinkowa, Cham and Balanga in order to promote large scale irrigation activities.

Earlier in his remark, the state Commissioner for Agriculture and Animal Husbandry, Hon. Mohammed Magaji said in line with the Governor’s directive, the ministry has made adequate arrangements so that the fertilizer reaches the farming populace at the grassroot.

Hon. Magaji said the ministry under one year of the present administration has achieved a remarkable feat in the Agric sector such as reactivation of annual animal vaccination of cattle, sheep and goat after years of neglect.

Other achievements he listed, include procurement of 30 trucks of NPK fertilizer, agro chemicals and knapsack sprayers which were distributed to 6000 dry season farmers at a subsidized rate across the state among other strides.

The Commissioner urged the government to deploy more Agricultural professionals to the ministry as many available ones are due for retirement next year.

Speaking at the event, the Director, Federal ministry of Agriculture and Rural Development, Dr Musa Mohammed Inuwa said the federal government through its GREEN IMPERATIVE PROGARAMME has secured a loan worth one billion from the Brazillian government to increase the level of mechanization in the farming operations.

He added that investment in Agriculture has also led to improvement in national security through job creation along food value chains as over 70% of informal sector jobs created in the economy were related to rural agriculture and federal government will be most willing to partner with Gombe state to take Nigeria to the next level in the Agriculture and livestock production.

The Director commended Governor Inuwa Yahaya for ensuring early sales of fertilizer in the state, a gesture he noted will help in boosting food production and economic activities in the state.