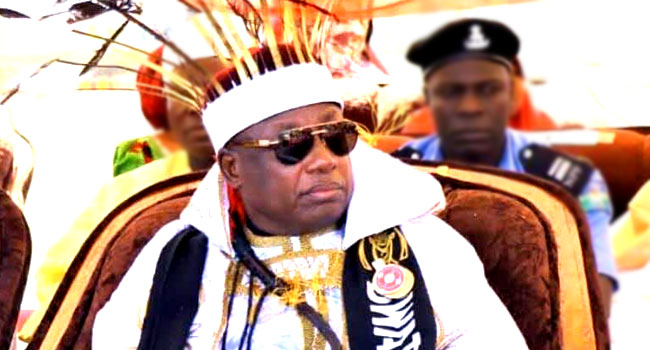 The Gombe team was received at cradle and source of Bachama civilisation, Lamurde by the Adamawa State Deputy Governor, Chief Crowther Seth in company of the custodians of Kingdom.

Delivering the condolence message, Dr. Manassah Jatau described the deceased as a man of peace who contributed immensely in nation building and left behind enduring legacies.

He lamented that the late Hama Bachama died at a time his wise counsel and royal guidance would have been very useful in navigating the country out of the challenging storms.

The Deputy Governor extended the condolences of Governor Muhammadu Inuwa Yahaya and the good people of Gombe State, stressing that the two states have for long shared many things in common, hence the visit to share in their pains.

Speaking on behalf of the Emirs and Chiefs of Gombe State, the Mai Kaltungo Engineer Saleh Muhammad said the deceased Hama Bachama had contributed in solidifying the relationship between the two states, praying the next Monarch would sustain the existing fraternity.

Responding on behalf of the Kingdom, Chief Mikaro Dominic, District Head of Lafiya- Lamurde thanked the government and people of Gombe state for identifying with them in their moment of sorrow.

He said they have had course to attend numerous events in Gombe state with the late Hama Bachama and assured that the relationship will be sustained.

Special prayers were offered for the repose of the soul of the deceased traditional ruler.