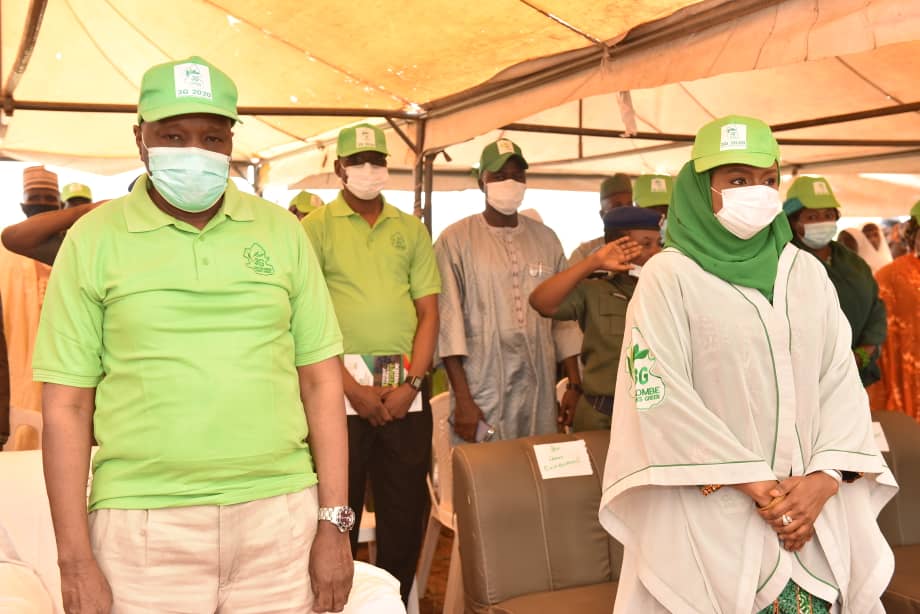 … as Gombe targets planting of 1.2 million trees this year

Governor Muhammadu Inuwa Yahaya of Gombe State has reiterated his administration’s commitment towards making environmental sustainability the cornerstone of its development agenda.

The Governor stated this at the flag-off of 2020 Gombe Goes Green (3G) Tree Planting Campaign in Wajari district of Yalmatu Deba Local Government Area of the State, with the theme “Greener Gombe for Greater Gombe”.

He said Government will continue to enhance and protect the ecological system upon which all lives and livelihoods depend.

The Governor explained that the overall launch of the Gombe Goes Green (3G) initiative on the 28th of August 2019, was aimed at addressing some of the pressing ecological problems facing the State.

He said the determination of his administration to address these environmental challenges led to the launching of the 3G project which targets the planting of 1 million trees annually over a period of four years.

He explained that since the launch of 3G project, the state has achieved significant milestones in the establishment of eight 20-hectare woodlots in 9 Local Government Areas of the State and planted over 20,000 trees along the major roads within Gombe metropolis.

The Governor further explained that Gombe state has over the years spent huge amounts of its resources in controlling gullies that are threatening social life and physical infrastructure in the metropolis and other local government areas.

He said the unwavering commitment of his administration to environmental sustainability has inspired the State to initiate the largest and most comprehensive environmental restoration project in the North East subregion, the 3G.

Governor Inuwa Yahaya said his administration’s resolve to priortise and preserve the environment was necessitated by the realisation of the severity and diversity of the environmental challenges confronting the State.

“It is common knowledge that Gombe is one of the frontline states that is threatened by rapid desert encroachment. Available evidence shows that about two-thirds of our entire state is facing various forms of land degradation such as desertification, deforestation and other negative effects on agricultural productivity leading to declining crop yield”.

He added that, “deforestation is major driver of both desert encroachment and erosion in Gombe state. During the past 4 decades, it is estimated that we have lost between 65 and 96 percent of our entire forest cover largely due to firewood and charcoal extraction, agricultural expansion and urban growth among other factors. As a result of years of unabated deforestation, our state has lost exotic indigenous tree and animal species, witnessed dangerous disruption of carbon and water cycles and loss of livelihoods, especially in our rural communities that depend directly on those resources “.

The Governor said he had already approved the distribution of 200, 000 seedlings to some selected groups and members of the public who are interested in joining Government’s efforts to combat the menace of of environmental decline as a way of intensifying and expanding the tree planting exercise to include social forestry and agroforestry.

He said Government will commence extensive tree planting in schools, hospitals and public buildings across the state in addition to planting along major roads and areas threatened by erosion as well as in barren and degraded lands.

Earlier speaking, the state Commissioner of Environment and Forestry Resources, Dr. Hussaina Danjuma Goje said, 3G is a pet project of Governor Inuwa Yahaya which aims at tackling the wide ranging environmental challenges facing the state, adding that during the last one year, the Governor has kept the project close to his heart by giving her Ministry all the needed support and resources to actualize its mandate.

She disclosed that Gombe state has secured a partnership with Forest Research Institute of Nigeria to plant 2 million trees in one year.

In his vote of thanks, the project coordinator, Gombe Goes Green, Dr. Muazu Shehu thanked Governor Inuwa Yahaya for being an honest friend of the environment.

He disclosed that over 22, 000 economic trees will be planted in the wood lot plantation site in Yamaltu Deba Local Government area.