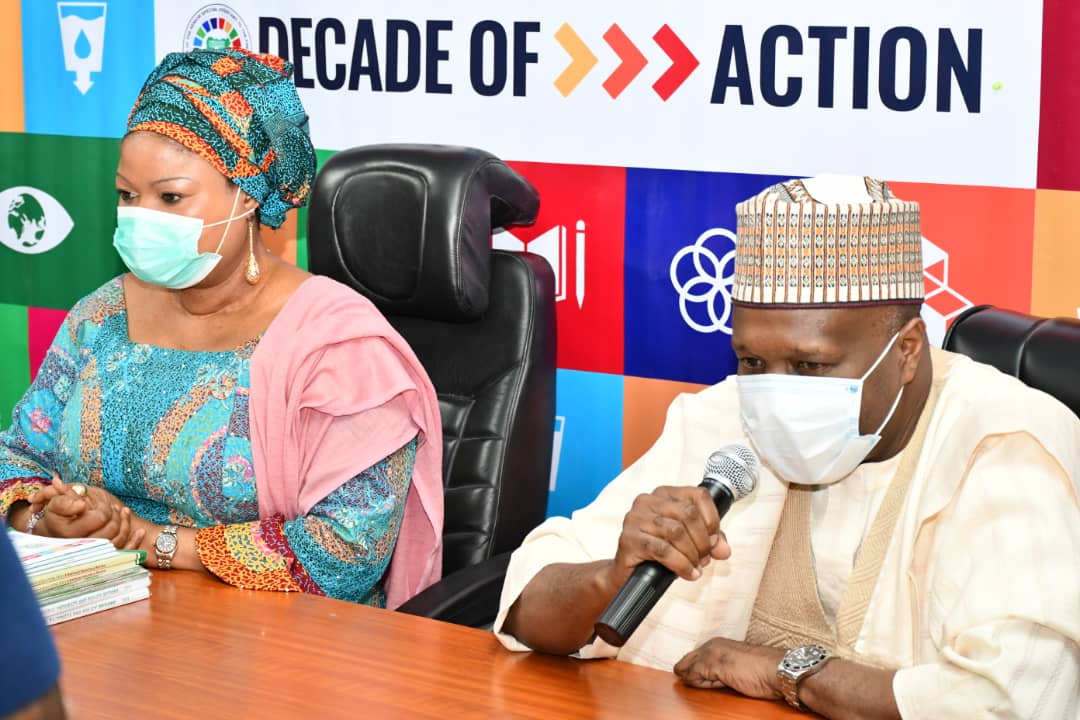 The Governor was speaking during a courtesy visit to the SSAP, Princess Adejoke Orelope-Adefulire in her office in Abuja.

He expressed profound appreciation for the commitment of the SDG’s office in supporting the preparation of the development plan to make it truly a model.

He said ” I note with satisfaction your support in the design of the Monitoring and Evaluation framework and funding of the robust stakeholder consultation from the ward to the state level as well as the dissemination of our 10 year Development plan, which has a special focus on health, education, agriculture youths empowerment, water supply among others.

He acknowledged the significance of the SDGs in driving global and national development agenda, describing its 17 goals as the bedrock of human development.

He said ” We had earlier identified our priority areas across all sectors and so far what we have been able to do within the last one year are in tandem with the aspirations of the SDGs”, adding that ” we have a clear vision and we have focused our attention to the provision of quality education, effective healthcare, which made us to embark on the modernisation of our health system that cascades all through the state”.

Governor Yahaya explained that “Gombe State, being at the center of the North east is affected by the conflict in the region in playing host to IDPs and migrants running away from the epicentre of conflict. This, he said, has led to the overstretching of the public service provisions in hospitals, schools and others social infrastructure. This is a critical challenge in achieving the SDGs targets”.

He emphasized that the SDGs can only be achieved with strong and enduring collaboration between the Federal and State governments, indicating that his visit is aimed at fostering the the partnership established with the office right from the MDGs days.

Governor Yahaya said, “Gombe is particularly proud to be associated with the SDGs as a Gombe illustrious daughter, Hajiya Amina J Mohammed, Deputy Secretary General of the United Nations left an indelible mark in the then MDGs office and was the one that led the design of the SDGs.

In her response, Princess Orelope-Adefurile commended Governor Yahaya’s disposition towards achieving the SDGs, describing Gombe state as a model in the strive to achieve the sustainable development goals.

She said her office will continue to partner Gombe in addressing its numerous developmental challenges, even as she assured to accommodate the state on the conditional grant scheme.

” For us here, we are ready to continue to work with you and we want to congratulate you for taking over from 3 to 4 states with your development agenda. We are going to make Gombe state a model for other states and we want other states to mirror what you are doing in terms of achieving the SDGs.