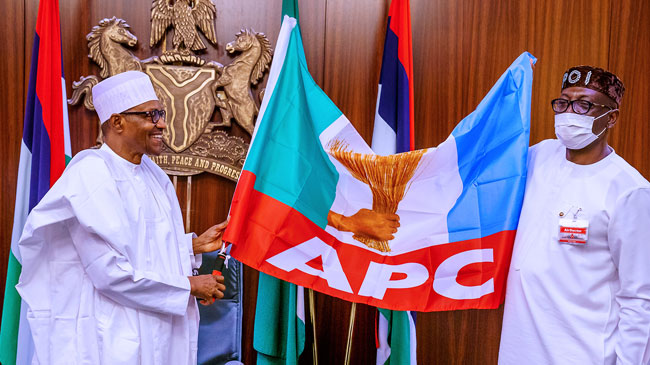 President Muhammadu Buhari has endorsed Pastor Osagie Ize-Iyamu as the candidate of the All Progressives Congress (APC) in the governorship election in Edo State.

The President gave the endorsement on Friday when he received Ize-Iyamu who was led to the Presidential Villa in Abuja by the APC Caretaker Committee Chairman, Governor Mai Mala Buni of Yobe State.

He presented the party’s flag to the APC candidate in the presence of two other governors elected on the party’s platform.

They are Chairman of the Progressive Governors’ Forum, Atiku Bagudu of Kebbi State, and Governor Abdullahi Ganduje of Kano State.

Shortly after his endorsement by the President, Ize-Iyamu briefed State House correspondents on what was discussed at the meeting which held behind closed doors.

He said he was grateful for the warm reception he received from President Buhari, adding that he was confident he would win the upcoming election.

The Independent National Electoral Commission had fixed September 19 to conduct the election.

Away from his endorsement, the APC candidate reacted to the removal of the rooftop of the Edo State House of Assembly.

He described the action as an invasion of the legislative complex, stating that there was no budget for the renovation of the facility. 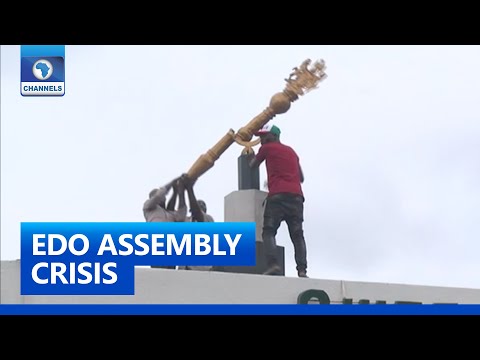 Ize-Iyamu accused the state governor, Godwin Obaseki, of beating the drums of war, claiming that the state deputy governor, Philip Shaibu, was paying student unions in Edo to protest on the day of the flag-off of the APC campaign.

He, however, congratulated Victor Edoror, who was claimed to have been elected by 17 lawmakers on Thursday as the new Speaker of the State House of Assembly.

The APC flagbearer also claimed that Governor Obaseki cannot form a quorum in the State House of Assembly as the APC numbers have risen from 14 to 17, leaving the governor with just seven members in the House.

He also insisted that the former APC National Chairman, Adams Oshiomhole, was not the face of his campaign, but was constantly being played up by the Peoples Democratic Party (PDP).

Ize-Iyamu explained that Oshiomhole had to de-market him in the last governorship election in Edo in order to sell Obaseki to the people.

On his part, Governor Ganduje responded to questions on the power of incumbency in the state ahead of the poll.

He said this would have been a problem if the incumbent governor was not “such a liability to the people of Edo State.”

Governor Bagudu, in his remarks, gave an assurance that the APC governors were fully in support of Ize-Iyamu’s candidature.

On reconciliation efforts by the APC, Governor Buni explained that the party’s candidate was a product of such efforts.

He noted that the caretaker committee was making more efforts to bring more aggrieved members back into the APC fold.

See photos from the meeting below: