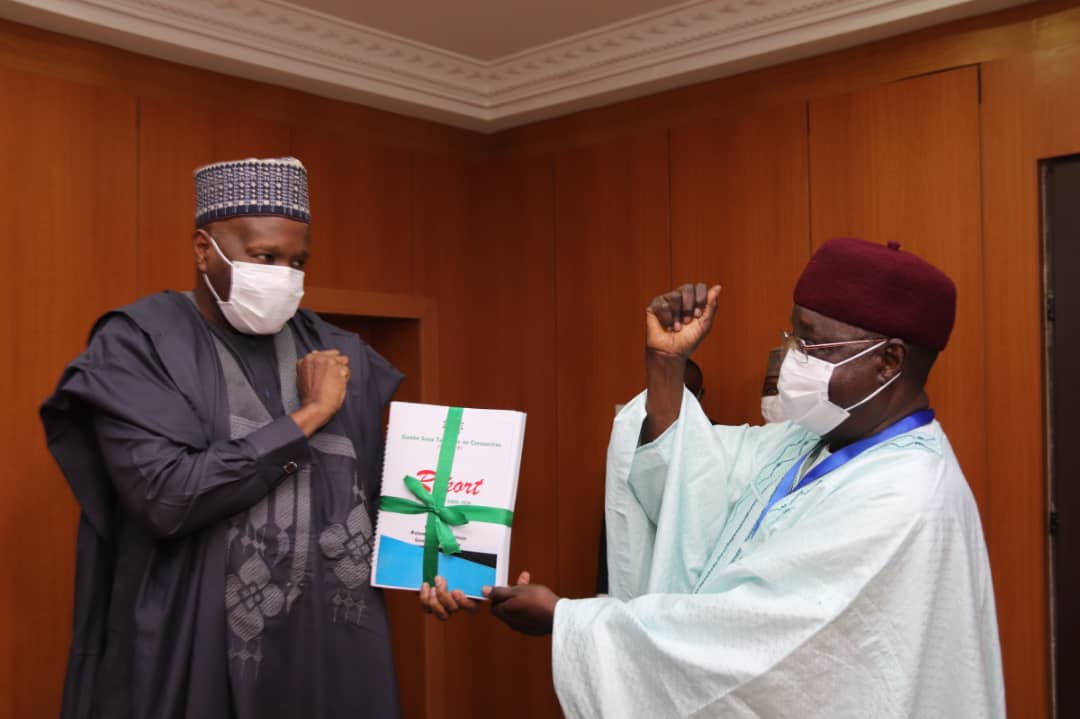 …says his administration remains resolute in sustaining fight against coronavirus

Gombe state Governor, Alhaji Muhammadu Inuwa Yahaya says his administration will remain resolute in sustaining the battle against the covid-19 pandemic in line with the international guidelines.

He was speaking while receiving a progress report from the state Task force on covid-19 on its operational activities since inauguration in March 2020.

While appreciating the commitment of the leadership and members of the task force in managing the dreaded pandemic, the Governor said the updated document submitted will help government modify and improve on targets, form opinions and develop containment strategies.

Governor Inuwa Yahaya assued that his administration will implement the recommendations in the document, adding that his government will not leave any stone unturned in reaching out and partnering any organization or individual that can support the state in fighting the pandemic.

He stressed the need for improvement in reaching out to the world on the entire activities of the taskforce through all media platforms.

He said, ” This presentation marks another important milestone in the management of the covid-19 Pandemic which has infected and affected the state, the country and the world as a whole”.

He noted, ” Since the inauguration of the State Task force on convid-19 on the 23rd of March this year, alot of positive and negative developments have passed under the bridge but the positives far outweighed the the negative side of the struggle to contain the Coronavirus”.

“Our State has received alot of accolades from those who know and appreciate hard work, at a point when the National Centre for Disease Control, NCDC was addressing the National Economic Council NEC, the case of Gombe was mentioned among the few that effectively manage the virus in accordance to international guidelines”.

He said the updates so far received from the Task force has assisted his administration in designing opinion and forming strategies that have brought success to the fight against the Coronavirus Pandamic.

“No one prays for the Pandemic, but that the coming of the covid-19 was God’s own test of the level of man’s resilience, patience and perseverance”, the Governor stated.

He explained that after series of engagements with the NCDC, the State finally established and commissioned its molecular laboratory which has since been testing for the covid-19 virus.

He said two of such laboratories are underway to be set up by the North East Development Commission, NEDC which will be sited at the Federal Teaching Hospital Gombe and the second by TETfund which will be domiciled at the medical college of the Gombe State University.

The Governor said when the additional laboratories come on stream, the State will no doubt take the driver seat in covid-19 testing in the country and in case management.

He said the viral picture of a student writing his terminal examination at an isolation centre was quite commendable and underscored the proactiveness and seriousness of his administration in taking measures to contain the spread of the virus and ensure safety of the citizenry.

Governor Inuwa Yahaya assured the Taskforce that all reports submitted by the committee will be published on Government website, local and international media outlets.

He said the zeal and commitment shown by the people and the Task force will be supported, saying his administration will leave no stone unturned in reaching out to relevant organisations for partnership.

Earlier in his remarks, The chairman Gombe State Task force on convid-19, Professor Idris Mohammed said the updated report presented to the Governor captured the establishment of molecular laboratory, School resumption for exiting students and the committee’s financial report from inception to date among others.

” The updated Report is being presented to you this morning, along with the Financial Report. We hope Your Excellency will find this useful. This is the third report that the Task Force is presenting to you, but will by no means be the last. This novel Coronavirus pandemic is peculiar in many respects, and its course is unpredictable. Therefore, no one knows for sure when it will end, nor do we even know if it will disappear altogether. It is thus imperative to remain prepared, active and vigilant in addressing the pandemic in all its unpredictable ramifications: severe economic downturn; social and religious disruption; and an impossible burden on health systems and infrastructure, among others”.

On the establishment of the testing centre, Professor Idris said “Following your observation that the Federal Authorities were slow or not forthcoming, you provided funds for the purchase of the necessary equipment – the rt PCR machine and its accessories – as well as upgrading and renovation of the SSH laboratories. The laboratory has now been established and has been approved and commissioned by the NCDC. Testing of samples from suspected Covid-19 infected persons has since began and is satisfactorily ongoing”.

Speaking on the re-opening of schools for exiting pupils/students, Professor Idris noted that the task force had put head together with the Ministry of education and officials of state universal basic education board (SUBEB) to ensure the covid 19 protocols are strictly adhered by both students, teachers and other stakeholders.

“The decision to reopen schools for examinations meant that the Task Force, in conjunction with the State Ministry of Education must of necessity prepare adequately for this to happen safely, with both students and teachers assured of highest protection from Covid-19”.

” Accordingly, all such returning students and their teachers were tested for Covid-19, the school premises fumigated”.

” The necessary preventive measures were put in place, such as provision of soap and hand washing facilities, hand sanitizers and face masks”

“In addition all schools were mandated to ensure social distancing and avoid assemblies. Arrangements were put in place to admit any students found to be positive for the infection to be admitted in equipped isolation centres where they could write the examination under joint supervision by the Ministry of Health, WAEC officials and staff of the Task Force in full protective gear”.

Professor Idris Mohammed recalled the remarks made by the Director General of NCDC who upon seeing the photograph of a Student writing his terminal examination in an isolation Centre in Gombe, gave the commendation thus:Good work by our colleagues in Gombe, there are many exceptional colleagues quietly pushing to make our country work.Thank you Gombe and keep pushing”.

He said with no significant financial assistance from outside the State, the Taskforce through the support of the Governor was able to test more than eleven thousand samples while establishing a molecular laboratory which costs over 120 million.

The Task force Chairman emphasized on the need for government to sustain its testing status so as to be able to ascertain the prevalence or otherwise of the pandemic in the state.

” Thankfully, the rate of positivity for Covid-19 in Gombe State has come down significantly of recent, and it is our hope and prayer that this trend will continue”.

While urging the Governor to continue the exemplary political leadership that containing the pandemic demands, he also appealed to healthcare professionals to remain committed as ever, despite the demands of these extraordinary times on their family and personal lives.