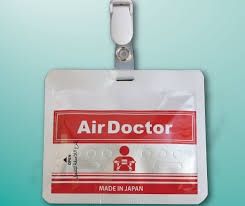 The National Agency for Food and Drug Administration and Control has disowned Air Doctor and other products that are marketed as capable of blocking COVID-19 from infecting the wearers.

The regulatory agency told newmen that the devices have not been registered by NAFDAC, even though it received applications for registration of some of them.

This is even as experts warn that the chlorine dioxide-dispensing badges, which seem to be gaining popularity among Nigerians that can afford them, may be dangerous, after all.

In recent times, public officials have been seen wearing the ‘COVID-19 blockers’ as badges.

Commonly pinned to the cloth in the chest area, public figures that have been spotted wearing the N20,000 device include a former Senator who represented Kogi West in the eighth National Assembly, Dino Melayo; Oyo State Governor Seyi Makinde; as well as the Edo State Governorship candidate on the platform of the ruling All Progressives Congress, Pastor Osagie Ize-Iyamu.

Made by Japanese company, Kiyou Jochugiku Co. Ltd, the devices are described as “a new generation of virus prevention” which “utilise the triple power of chlorine dioxide gas at low concentration (0.03 PPM) for the prevention of air-borne infection, as well as bacterial and fungal infections.

According to the information on the manufacturer’s website, https://airdoctormena.com,  which is a sub domain of http://kiyou-jochugiku-global.com, the devices “eliminate microbiological contaminants such as bacteria, viruses, moulds, spores, and even beta-lactams and pinworms.”

The manufacturers said “researchers have found that in appropriate concentrations, chlorine dioxide is both safe and effective.”

Speaking with our Correspondent, medical experts warned that there is no evidence that Air Doctor badges sanitise or prevent infection.

A Nigerian-born epidemiologist and population health scientist at the Harvard University, Dr. Ibraheem Abioye, said, “There is really no evidence that the products work.

“The sellers claim that the products sanitise the air around the wearer. But we know that some of the people who have been the main advocates still became infected with COVID-19.

“There are already science-backed actions that people should take and shams like these are likely to put people at risk.”