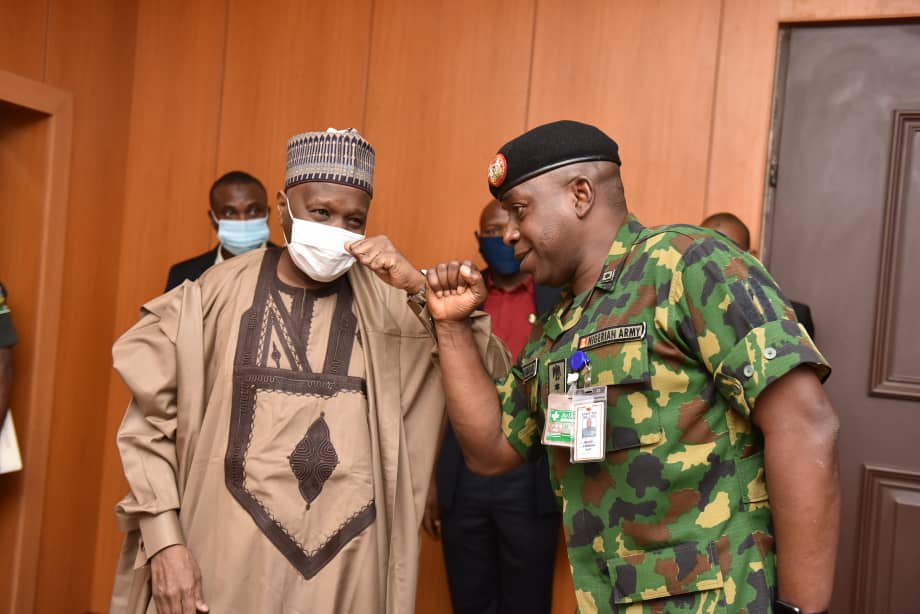 Governor Muhammadu Inuwa Yahaya of Gombe State has said that no price is too big for his administration to pay for the people to enjoy maximum peace and security in the state.

The Governor stated this when he granted audience to the Acting General Officer Commanding, 3 Division, Jos, Brigadier-General Musa Danmadami who is in the State on an operational tour.

Governor Yahaya told the GOC and members of his entourage that while in the state, they should equally interact with the people to appreciate their fears in respect to security challenges facing them and the state.

He said the GOC’s visit which came barely two weeks after the Chief of Army Staff came calling, indicates how concerned and determined the Nigerian Army is to protect the peace in the State and by extension to restore calm in troubled spots across the country.

The Governor described the visit as necessary to understanding the dynamics of security in the state without which the army may find it difficult to profer solution.

“While you go round your military formations it is equally important to visit those places that are very vulnerable to attacks and threats so that you can know how to tackle them”.

He thanked the Army for the support Gombe State has been receiving from it but however noted that the peace and the location of the state at the centre of the North East makes it a safe haven for fleeing IDPs which may pose threat to the continuous peace of the state.

The Governor informed the visiting GOC that the mountainous area between Shongom Local Government Area of Gombe State and Karim Lamido of Taraba State has been a home to criminal elements who are hell bent on disturbing the peace and means of livelihood of the people.

“As you rightly said that Gombe is a peaceful state in the region, so if you allow Gombe to slip up and fall into that category then God forbid, the whole region will be having a problem and you can imagine 22 million people falling into danger”.

He charged the Army to redouble its efforts in maintaining the peace, as according to the Governor “instead of trouble coming in here, let peace reach out to them so that the whole subregion will be peaceful”.

He said inspite of the economic depression being experienced across the world due to the covid-19 Pandemic, his administration will not shy away from doing everything necessary to support the constitutional mandate of the Nigerian Military in maintaining peace and order in the state.

“Our political will can never be shaken in fact this is the only State in the region that has an entire Ministry for Internal security and Ethical Orientation, it was not by accident but by design to have such a Ministry because of our love for peace”.

Earlier speaking the Acting General Officer Commanding 3rd Armour Division Brigadier General Musa Danmadami said he was in the State on a familiarization tour of commands under the sphere of influence of the Division.

He said as the chief security officer of the state, it is mandatory for him to come and interact with the Governor and members of his cabinet on the dynamics of security in the State.

“There is no doubt that the state under your leadership has provided enormous support to the Division through the 301 Artillery Regiment Gombe”.

He commended the Gombe State Governor for the continuous support and appealed for such to be maintained even as the 301 Artillery Regiment makes plans to relocate to its permanent site along Gombe-Kumo road.

Brigadier General Musa Danmadami said he is of the view that crisis of whatever sort can only be addressed through political solution, a trait he said is inherent in Governor Inuwa Yahaya because of his administration’s commitment in carrying every section of the state along.