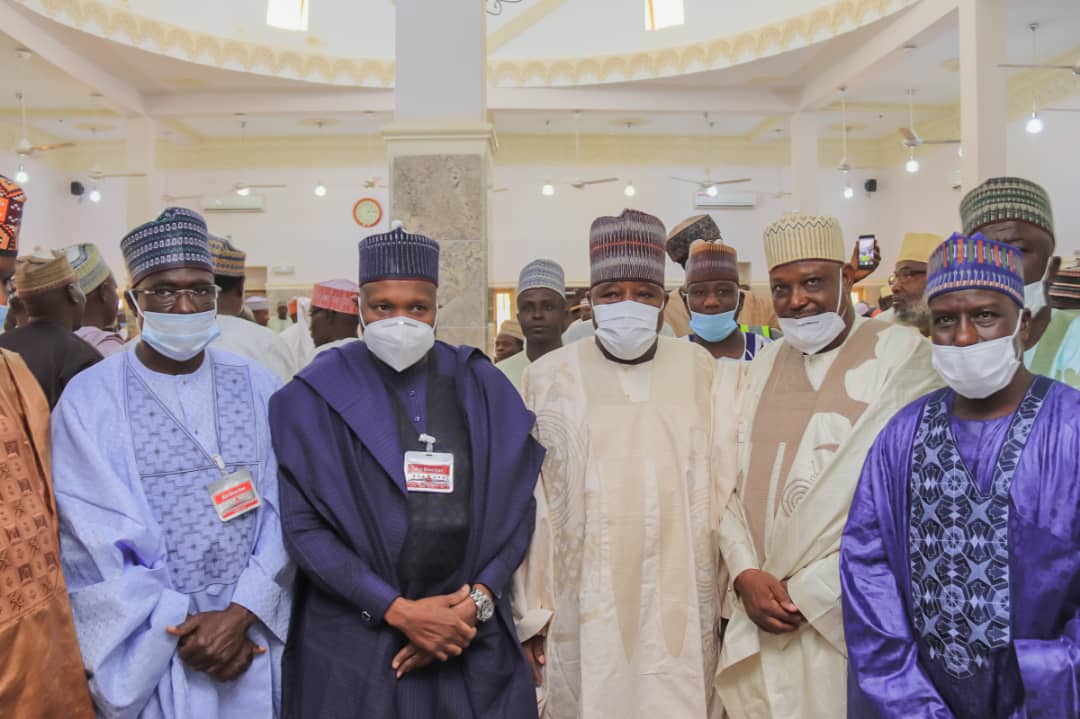 Governor Muhammadu Inuwa Yahaya of Gombe State today attended the wedding fatiha of member of Gombe state House of Assembly and Chairman of the committee on Appropriations, Hon. Ali Baba Manu as he got married to Jamila Ahmed.

The wedding fatiha which took place at the Bubayero Central Mosque, Emir’s palace Gombe, witnessed the presence of high profile dignitaries, including the Speaker of the state House of Assembly, Hon. Abubakar Sadiq Kurba, his Deputy, Hon. Siddi Buba, members of the state House of Assembly, the Secretary to the State Government, Professor Ibrahim Abubakar Njodi, chief of Staff, Alhaji Abubakar Inuwa Kari, Commissioners, Special Advisers and top Government functionaries as well as other guests from within and outside the state.

The Emir of Gombe and Chairman of Gombe state Council of Emirs and Chiefs, Alhaji Abubakar Shehu Abubakar III witnessed as the Chief Imam of Gombe central mosque, Alhaji Muhammadu Umar Pindiga presided over the wedding and contracted the marriage between Hon. Ali Baba Manu and Jamila Ahmed where Governor Muhammadu Inuwa Yahaya stood in for the groom and received the marriage on his behalf while Justice Saad Ahmed gave out the bride on behalf of the Ahmed family after the announcement of 100, 000 Naira dowry in line with Islamic injunctions.

Governor Inuwa Yahaya had in a message of felicitation, admonished the couple to put Almighty Allah first in their affairs, build their marriage on trust, patience and respect to one another as well as remain prayerful at all the time.

He congratulated Hon. Ali Baba Manu and his bride, Jamila Ahmed as well as their respective families for witnessing this auspicious occasion, praying Almighty Allah to bless the marriage.

Governor Inuwa Yahaya was also at the Masjiduttaqwa, GRA Gombe where he also served as the ‘Wali’ in the wedding fatiha between Sani Yakubu of Arch. Yunusa Yakubu family and Lauratu Ibrahim which was contracted upon payment of 50, 000 Naira dowry.

The wedding fatiha, presided over by the Chief Imam of the mosque, Sheikh Adamu Ardo, was witnessed by dignitaries, including former Governor of Borno state, Sen. Ali Modu Sheriff.