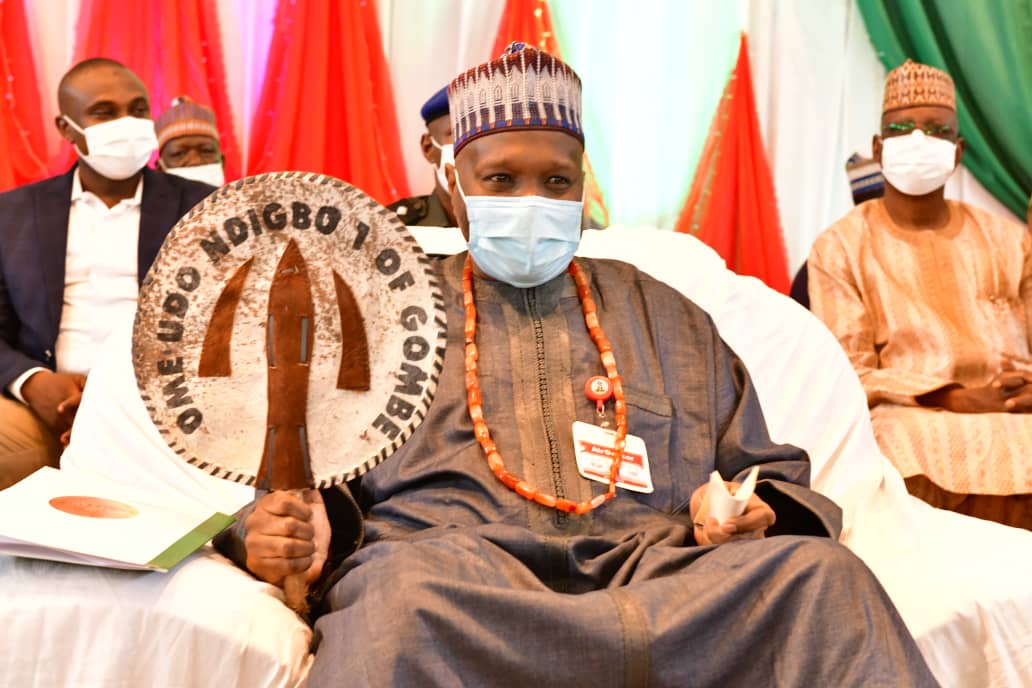 Governor Muhammadu Inuwa Yahaya says his administration will continue to provide a friendly atmosphere and enabling environment for all ethnic nationalities residing in Gombe State to attain their aspirations and contribute to the progress of the state.

The Governor was speaking when he played host to the members of Igbo community and other ethnic nationalities residing in Gombe led by the President General of the Igbo Community Development Association, Sir Ben Aruonu at the Government House.

The Governor noted that there have been flourishing trade relations between the people of Gombe state and the Igbos and therefore emphasized the importance of sustaining the unity and mutual understanding for the progress and development of the state and the nation as a whole.

He also stressed that the task of building the nation and Gombe state is a collective responsibility of all regardless of origins, saying the people stand stronger, live better and happier if they remain united.

Governor Inuwa Yahaya said his administration will continue to involve the Igbo and other ethnic nationalities in the issues of Governance in the State.

He said in view of the abundant human and natural resources that abound in the country, Nigerians have every reason to be proud of themselves, accommodate one another and create an environment where upcoming generations will be proud of.

“Our relationship is supposed to be harmonious, of joy and happiness. Our relationship should be mutually beneficial. God has blessed this country abundantly in human and mineral resources. We have every reason to be proud of ourselves, to accommodate one another and to provide the ground on which our children and grandchildren will enjoy and have harmonious relationships. Our coming together is a source of strength,” he said.

The Governor said the decision to appoint Prince Chidebelu Ewuzie as his Special Adviser on inter-community relations was born out of government’s desire to foster unity a harmonious relationship in the state.

“Nobody could have done this better than Prince Ewuzie, knowing fully well that he started his life here and rose to become a successful businessman and an employer upon whom alot of people earn their livelihood especially in the construction industry”.

Governor Yahaya also guaranteed the Igbo community a piece of land they requested for to build a secretariat and a cultural centre, pledging same treatment to any other ethnic group residing in the State.

He equally promised the Igbo community and other ethnic groups in the State that his administration will give fair treatment to all in the areas of admission into the state’s institutions, job placements and business opportunities.

The President-General of the Igbo Community Development Association in Gombe, Sir Ben Aruonu said they were at the Government House to appreciate Governor Muhammadu Inuwa Yahaya for deeming it fit to appoint one of them, Prince Chidebelu Ewuzie as Special Adviser on inter-community relations.

He described Governor Inuwa Yahaya as a peacemaker and detribalized Nigerian calling on other Governors, particularly those in the South East to emulate the Gombe by appointing individuals of northern origin in their respective states so as to diffuse ethnoreligious lines hunting the country.

He appealed to the Igbo community to continue to support the present administration in Gombe State by paying their taxes to enable Government to carry out the developmental project.

During the visit, the Governor was formally conferred with the traditional title of Ome Udo Ndigbo 1 of Gombe ( Peace Maker)

Leaders of other ethnic groups, including the Tiv, Idoma, Ebira, Era Edo, Yoruba, Ngas, Margi among others were present during the visit.