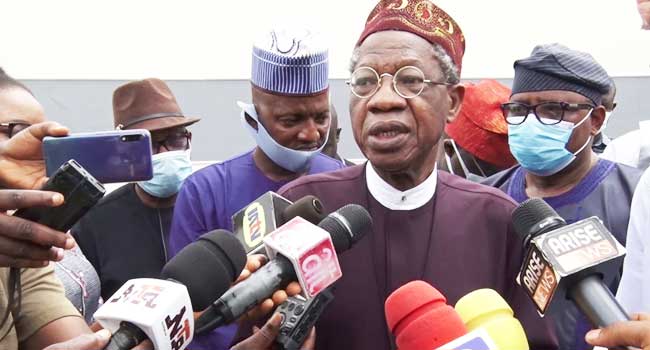 The Minister of Information and Culture, Lai Mohammed has condemned the recent attack on some media houses.

Mohammed who spoke in Lagos on Saturday when he paid a visit to the media organisations that were attacked in the aftermath of the EndSARS protest and the Lekki shooting, said any attack on media houses was an affront on democracy in the country.

“Whoever attacks free press is also attacking democracy because there can no democracy without a robust and vibrant free press,” he said.

“That is why this attack must be condemned without any reservation. Closely those who came here came with a purpose. It was to shut down the voice of reasoning.

He also reiterated the commitment of the Federal Government to regulating the social media, stressing that the move was to protect the rights of other Nigerians.

The minister noted that he wasn’t going back on his earlier assertion that the government would control the media.

“A few people will say look at the minister who just a few days ago was speaking about regulating the social media. What kind of double speech? He is coming here again to talk about protecting the media.

The minister’s remarks come 10 days after the headquarters of Television Continental (TVC) among other media houses were attacked by a mob in Lagos.