The Judicial Panel set up by the Lagos State Government to probe alleged cases of police brutality in the state played back the closed-circuit TV footage from the October 20 Lekki shooting at its meeting on Friday.

The panel had obtained the footage of the incident from the Lekki Concession Company (LCC) at its last sitting.

The Chairperson of the panel, retired Justice Doris Okwuobi granted approval for the footage to be played after hearing from the counsel.

The video was played for about four hours after which the counsel to the #EndSARS protesters, Mr. Adeshina Ogunlana, requested the footage for further viewing.

This was opposed by the counsel to the government, Abiodun Owonikoko. 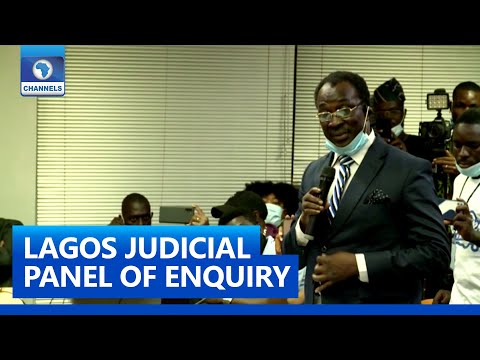 Earlier, Mr. Ogunlana’s appearance had been objected to by the opposing counsel on the grounds that the #EndSARS protesters were not recognised by law.

After a prolonged argument, Mr. Ogunlana presented three ladies as representatives of the #EndSARS protesters.

The panel chairperson, Justice Okwuobi, then ruled that Mr Ogunlana could represent the protesters.