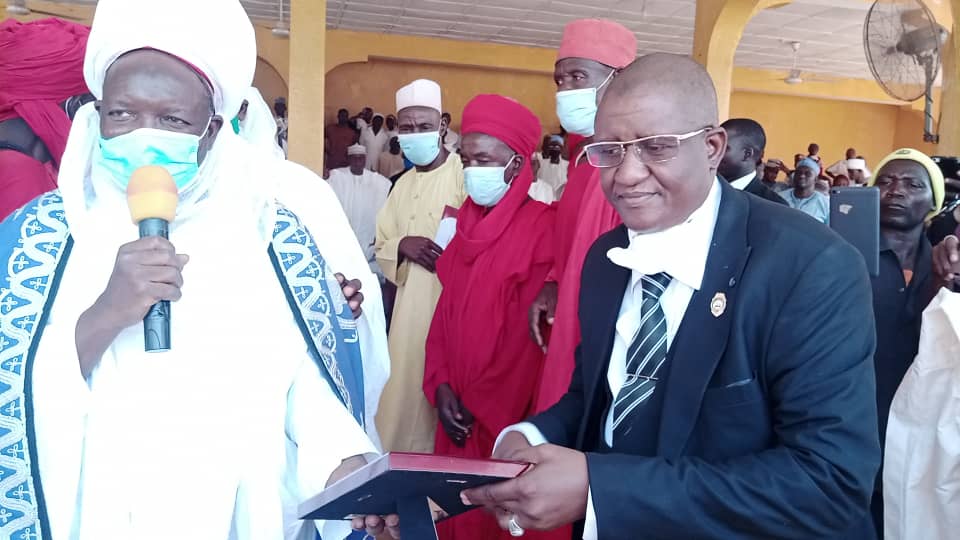 Paramount ruler of Ganye chiefdom, Alhaji, Dr Umaru Adamu Sanda OON, at his palace in Ganye honoured Chief Superintendent of Police (CSP), Mohammed Ibrahim, who is in charge of Adamawa state intelligence bureau of the Nigeria Police force, over his exceptional service in the fight against criminality across the state.

The invitation and honour followed a recommendation by the Adamawa state commissioner of police, Olugbenga Adeyanju during a courtesy call on the monarch a few weeks ago in Ganye.

Olugbenga had noted that CSP Ibrahim was among the very few outstanding officers of the Nigerian Police that has made his job in Adamawa easier.

The commissioner listing the CSP achievements said, ‘’the gallant officer and his team recorded several successes in combating organised crime in Adamawa, which include the arrest of the notorious kidnappers in Adamawa; arrest of leaders of the notorious Shila boys gang.

The Monarch, Alhaji, Dr Umaru Adamu Sanda OON, during the ceremony today in Ganye extolled the police officer, describing him as an intelligent man that has sacrificed himself for the state and is celebrated for all he has done for the state.

He applauded the CSP and called on the state government to give him a state honour, adding that the royal house is honouring a dogged and courageous police officer.

He said Ibrahim is a symbol to show that they are identifying Adamawa sons and daughters who are adding value to the state.

The Revered monarch described Ibrahim as a policeman per excellence and a good ambassador of the North East.

He said he had brought a lot of achievement to the police service and the Royal House will always remain thankful for his services.

In his acceptance speech, Ibrahim thanked the Monarch and the state Governor, Ahmadu Fintiri and the commissioner of Police, Olugbenga Adeyanju for finding him worthy of the award.

‘’There’s no greater award than this because it is coming from our royal father who is the representatives of the people. I dedicate this award to those who paid the ultimate price, and I give sincere gratitude to God, my boss the commissioner of Police, Olugbenga Adeyanju, all members of the Nigeria Police and my family,’’ Ibrahim added