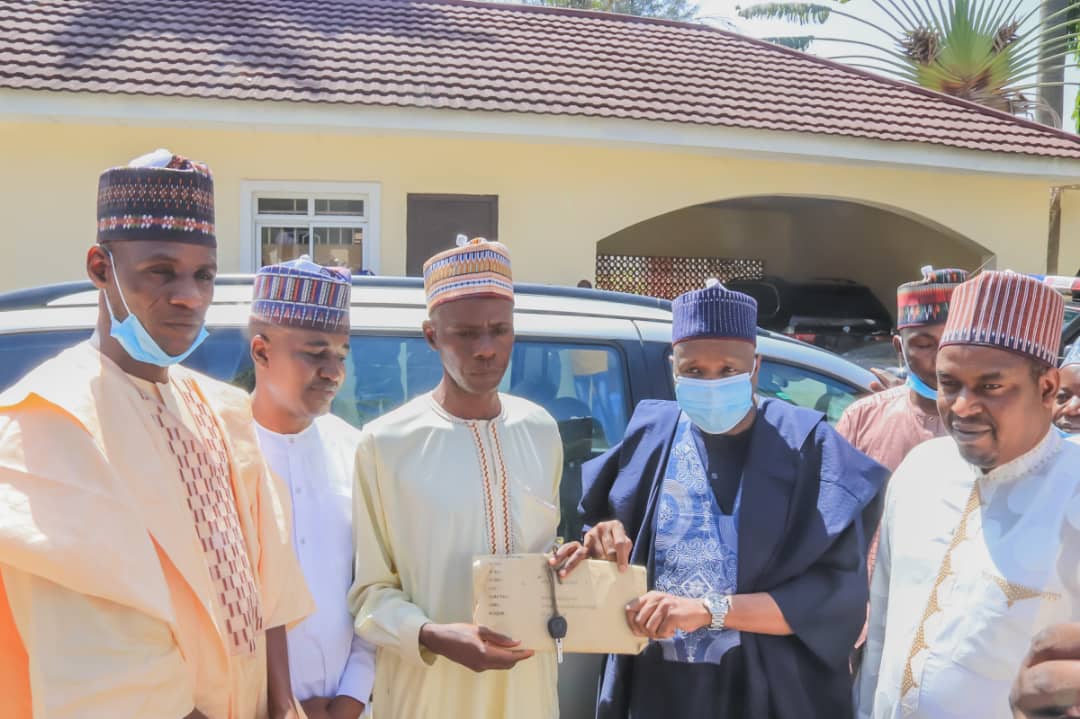 The governor of Gombe, Muhammed Inuwa has surprised Buba, Dukku, the man who trekked from Gombe to Abuja for Buhari’s victory in 2015, as Governor Inuwa Yahaya gave him a car and 2 million Naira.

The governor, who purchased a ford wagon, which he presented to the Buba Duku.

The Finder reports that Dahiru Buba calling on the Government and public-spirited individuals to come to his aid after he developed limb complications from a solidarity trek he undertook to celebrate the first term victory of the President.

The Gombe State Governor, Alhaji  Muhammadu Inuwa Yahaya had earlier directed that Dahiru Buba be taken to the Government House clinic for diagnosis from where he was later referred to a private orthopaedic hospital where he was thoroughly examined and placed on medication.

Buba, a commercial driver, met with Governor Inuwa Yahaya at the Gombe Governor’s Lodge in Abuja.

Governor Yahaya, while presenting the gifts said, “For taking the pains and risks to show solidarity with Mr President and our great party, people like Buba should not be neglected.

“By embarking on that solidarity trek, Dahiru Buba had shown patriotism and support, he should therefore be appreciated and encouraged”.

“So on learning about his condition, first I directed that he should be taken to the hospital for proper medical attention and I am happy that he is now better after undergoing his first round of treatment “.

Secondly, we are now capping it up with support that we hope can sustain him. Since he is a Driver, we are giving him this Ford  Galaxy Sharon so he can use it as a commercial transport vehicle to sustain his livelihood.

We are also giving him the sum of 2 million Naira cash to enable him to purchase a house within his locality since I learnt he is a tenant.

So as far as we are concerned in APC and this administration, no genuine effort or sacrifice will go unrewarded no matter how long it takes”.

“So on behalf of our dear President and our beloved party, we say a big thank you for your show of support and solidarity”.

In his response, Malam Dahiru Buba, who was visibly emotional, expressed appreciation to Mr President and Governor Muhammadu Inuwa Yahaya for recognising him and coming to his aid.

He said even with his earlier challenges after he returned from his 15-day journey, his spirit had never been dampened in his love for the President and his party.

Buba promised to use the vehicle and the money judiciously, saying the gesture truly motivated and spurred him as a loyal party man and as a breadwinner of his family.