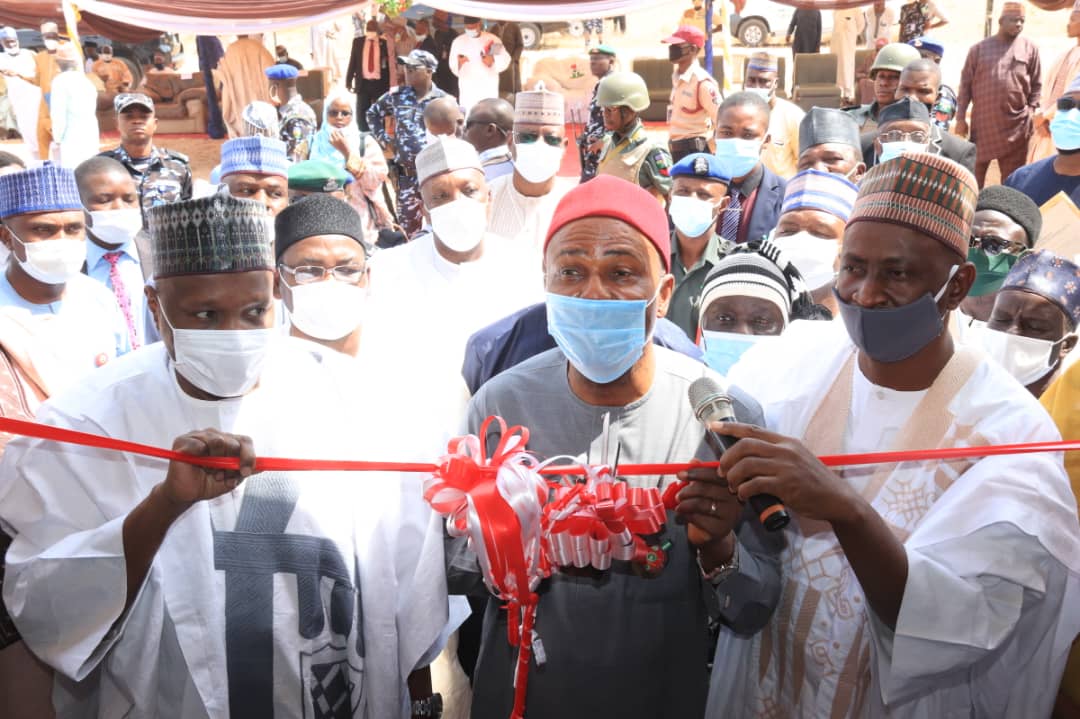 ” You are True Example of What APC Governor Should Be”, Dr Onu Lauds Gombe Governor’s Superlative Performance

Gombe State Governor, Alhaji Muhammadu Inuwa Yahaya says the establishment of the National Institute for Trypanosomiasis ( NITR) will improve livestock production and impact positively on the lives of the people of the state.

The Governor stated this when he granted audience to the Minister of Science and Technology, Dr. Ogbonnaya Onu who was in the State for the commissioning ceremony of the Zonal office of NITR in Gombe.

He told his guest that more than 70 per cent of the people of Gombe state are farmers involved in either crop or livestock production, noting that an institute like NITR will help to combat the devastating effect of tsetse flies on both animals and human beings.

Governor Yahaya said Gombe will no doubt benefit from the institute’s services and that his administration is willing and ready to contribute to its growth, explaining that besides the infectious nature of tsetse flies on animals, human beings are also at risk of contracting onchocerciasis each time they come in contact with them, hence the need to galvanize ideas and forces to combat the menace.

He said sitting of the zonal office of NITR in Gombe is apt which was why on request by the Federal Ministry of Science and Technology he wasted no time in allocating a piece of land for the construction of the research centre, describing the speed at which the office was built as impressive.

“When the Ministry of Science and Technology approached me for a land to build this structure, I gave it instant approval and they equally responded instantly and you can see the result here today”.

“A lot of Federal Government ministries and agencies came and took allocation and abandoned them, but for the Federal Ministry of Science and Technology, the very month the land was allocated you swung into action and put up a structure, so that confirms the level of dedication, commitment and hope you want to bequeath to the people of the State”.

“Gombe State as you rightly said is at the centre of the northeast and as such whatever is sited here will benefit the entire region as it will not take more than two hours, especially in the days when roads were good from any of the State’s headquarters to get to Gombe”.

The Governor said the State Government will enlighten the populace on the benefit of the institute owing to the fact Gombe is home to one of the largest grazing reserves in Africa, the Wawa Zange Grazing Reserve, which measures about one hundred and forty-four hectares of land dotted with livestock breeders.

To this end, the Governor said, anything that can be done to support livestock development in the State and by extension, the northeast is highly welcome. He thanked President Muhammadu Buhari for approving the setting up of the NITR’s northeast zonal office in Gombe.

Earlier, the Minister of Science and Technology, Dr Ogbonnaya Onu said the setting up of the NITR’s zonal office is Gombe marks a great milestone as the centre is of great economic importance to the State and the nation considering the fact that Gombe State has a rich livestock industry.

The Minister noted that economies of many countries across the world are dependent on livestock production, expressing confidence that Gombe State can blaze the trail in animal husbandry for the benefit of the people of the State and the country as a whole.

He noted that the siting of the institute in Gombe will improve the quality of livestock which will translate to increase in yields in terms of meat, milk and other derivatives from livestock, which will eventually increase the income of livestock farmers and by extension boost the economies of the zone.

Dr Onu told his host that, “President Muhammadu Buhari is working to ensure that we are able to help our livestock farmers so that if we establish livestock ranches and grazing reserves they can be free from tsetse flies”.

He said livestock farmers cannot ranch their animals properly without the input of the NITR hence the establishment of a zonal office in Gombe to cater for the health needs of livestock and even human beings.

“ If we are unable to control tsetse flies there is no way we can have ranches; if you put cows and other animals in one place and they have tsetse flies around them, it is like leaving them in danger ”.

“By the location of our nation, we have the tsetse fly which is very dangerous it has its contribution to nature but it has a very devastating effect on the lives of both animals and human beings”.

While paying glowing tribute to Governor Muhammadu Inuwa Yahaya for his good governance, the Minister said the policy thrust of the Governor personifies what is expected of an APC Governor.

“I want to commend you for the work you are doing for our people in Gombe State in the best interest of our nation. We are happy that you proved yourself a very good example of what an APC Governor can do to transform and improve on the standard of living of our people. I must tell you, Your Excellency, that we are proud of you”.

The Governor later accompanied the minister to the newly established NITR zonal office along Bauchi road where they performed the commissioning ceremony, during which the Chairman of the governing board of the institute, Hon. Shehu Haruna Lambo hailed Governor Inuwa for his speedy response in allocating the land upon which the Zonal office was built and for his support in ensuring its immediate take-off.