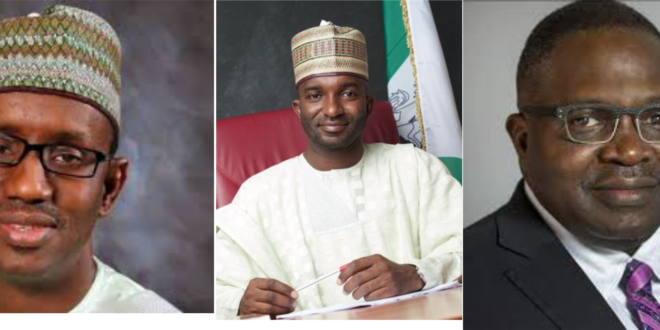 Of late, the Adamawa opposition APC in the news. Its decision to search for peace and also woo aggrieved politicians that fell out with the party in 2019 due to bad outing in the party primary or losing the ticket to Senator Jibrilla Bindow and they subsequently plots the fall of the candidate not minding the effect on the party.

Recently the APC in Adamawa woke up from their slumber claiming to have reconciled those that left the party in 2019 not minding the electoral viability of most of the politicians they welcome back to their fold like the father of the prodigal son receive back his son without looking at his antecedent.

In this sense, the consensus underlined a different reality: that over the last one year, the Adamawa APC has contrived to dominate the conversation on the political scape of the state and preferred outcomes.

The recent renewal of commitment to the party by most of the prodigal sons and daughters welcome back to the party in Adamawa does not arguably represent the novelties.

Otherwise, most of the recent defectors to APC in Adamawa are consistent with a dirigiste mindset that saw the party losing the 2019 election in the state if the preferred candidate of the cabals did not win the primary.

In no distant time, their true colour will manifest before 2023, as the marriage of convenience being arranges by the party leaders in the state will not last, either before the party 2023 primary or after the primary same crisis will rock the party again.

There is less clarity on how much each of the new defectors will impact positively in the party before 2023. Most of the prospective political actors ganging up in the APC today in Adamawa against Umaru Fintiri has serially contested and lost either presidential or governorship election both in the state and the national level.

Nuhu Ribadu: a former chairman of the economic and financial crime commission before he was unceremoniously removed from office and demoted by the Musa Yar’ dua administration.

During the course of his duty, Ribadu was offered bribes to pervert the course of justice, amongst these was a State governor who offered Ribadu $15 million and a house abroad. Ribadu said that he took the money and used the bribe as evidence to prosecute the state governor.

This claim has however been refuted by the ex-governor who noted that the fact that Ribadu put the money in the CBN is not proof that he gave the money.

He lived in exile until 2010 when he returned to Nigeria and declared his intention to run for President of Nigeria under the platform of the Action Congress of Nigeria (ACN) and came a distant third with total garner votes of 2,791, 051. He lost his polling units, his ward and his home state of Adamawa.

In August 2014, he defected to the ruling party PDP to run for the Governorship of Adamawa State, Again he lost his polling unit, ward and local government, Nuhu Ribadu, scored 98,917 votes to emerge third after random defeat from Jibrilla Bindow of the APC in 2015.

Before the 2015 election PDP was the ruling party in the state and at the federal level, despite the federal might and the slush fund deployed to ensure his victory, and it could not stop the APC from victory.

For the third time, he contested the All progressive congress primary alongside, Halilu (Modi) and Senator Umaru Jibrilla and still lost.

Senator Nyako: a retired Naval officer, before he ventured into politics, He represents Adamawa central in the 8th National Assembly.

Senator Nyako is the chairman of the Special Duties Committee of the 8th National Assembly. Nyako was elected as a senator into the 8th National Assembly under the All Progressives Congress (APC) but later decamped to the African Democratic Congress to contest as a governor for Adamawa in 2019 he garnered total votes of 113,237. He is the son of the former governor of Adamawa state, Murtala Nyako.

Emmanuel Bello: a former member of the Nigerian House of Representative from 2007 to 2011 representing Gombi/Hong federal constituency on the platform of the PDP but was allegedly short-changed at the primaries.

He took the party to court and secured a favourable court verdict as the authentic PDP candidate and the duly elected member representing Gombi/hong federal constituency.

He later defected from the PDP to APC, and he later defected from APC to SDP to realize his gubernatorial ambition and succeeded taking over the party structures which subsequently led to a sharp division within the party in the state leading to the defection of other party members to Action Alliance. He contested the 2019 governorship election and garnered a pastry sum of 29,792 votes.

Senator Ishaku Abbo: is the senator representing Adamawa North Senatorial District in Adamawa State at the Nigerian 9th National Assembly. He is currently a member of All Progressive Congress APC.

On the 9th of February, 2004, Mr Elisha Abbo had sued the authorities of the Nigerian Naval Training College, Onne, Port Harcourt for allegedly denying him admission into the college on the grounds of his HIV status.

Legal action was instituted on his behalf by the vice-chairman of the NBA, Abuja, Barr. Jude Okeke at the Federal High Court Abuja.

After that, he was on the 2nd of July, 2019, caught in the act of physically assaulting a nursing mother inside an adult toy shop. He, however, apologized after a huge media backlash by Nigerians.

Abbo narrowly defeated the candidate of the All progressive congress, Senator Binta Masi in 2019. He garners 79,337 to defeat his closet rival Binta Masi who polled 63,219.

Investigations reveal that none of the mention politicians listed above poses a threat to Governor Ahmadu Fintiri of Adamawa state in any contest if given the APC ticket come 2023.

AFAN Benue State chapter in a statement in Makurdi by its chairman, Aondongu Saaku and …