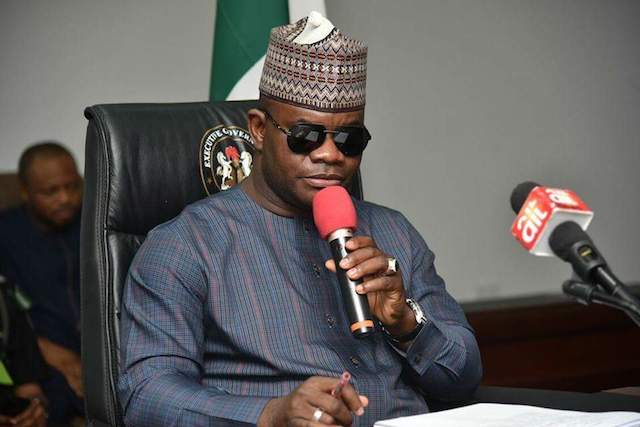 The Kogi State Government last year spent N90 million on software that the developers now offer for only N300,000.
The software, approved by a COVID-19 sceptic, Governor Yahaya Bello, was for tracking coronavirus cases in the state. However, the software is no longer functioning as the developers said they had a contract to host it for only one year.

At a time Nigeria had just recorded over 6,000 cases of COVID-19, the Kogi State Government announced it had developed a software, which is basically for risk assessment.

The state government said the software, which comes in a mobile application and website, was one of its measures to curb the spread of COVID-19 in Kogi.

The software uses the checklist of the Nigeria Centre for Disease Control (NCDC) for suspected and high-risk cases to evaluate users.

Financial records obtained by Journalists revealed that the state government procured the software at a cost of N90,720,000.

But checks by our reporter showed that the same software now costs only N300,000 from the same company that developed it for the state government.

An official of the state also admitted that the government actually spent less than a million naira for the project and could not defend the N90.7 million announced expenditure; an indication the declared price was excessively inflated.

As of March 2020, when Nigeria had about 6,000 confirmed cases of COVID-19, Kogi and Cross River were the only two states in the country with a zero-case status.

The NCDC had raised an alarm then that the two states were not conducting tests for the virus. For instance, in Kogi, officials deployed by the federal health agency were denied cooperation and controversially sent back.

Asked why Kogi was not conducting tests, Governor Bello, during an interview on Channels TV, said the state had developed a special app to track possible cases of coronavirus infection.

“So far, so good, we have launched an app and if nobody shows any sign or any cause for any test, we would not go out and begin to test anybody. Because there’s enough and adequate sensitisation of our citizens. So far, we don’t have any testing centres here but there’s one in Kubwa in FCT,” he said.

Meanwhile, data from NCDC, a year after the first COVID-19 case was recorded in the country, exposed the inadequate testing for the virus in Kogi.

Experts said that explains why the state had not reported a single case and death over 250 days after its record of five cases in July.

Mr Bello, an accountant, had also repeatedly described the deadly disease as a hoax and discouraged the use of the COVID-19 vaccine.

The Kogi COVID-19 risk assessment application, which is in two categories; web and mobile applications, was accessible on  www.kogicovid19.com.ng.

Going by its features, users were to fill a questionnaire on the app and from the information provided, health workers could ascertain whether the user has been exposed to the virus and was exhibiting symptoms that warranted further actions.

According to the state government, if a user was a high-risk case, health workers would then trace their location for further engagement.

Although health experts and public affairs analysts questioned the efficacy of the app, the state Commissioner for Information, Kingsley Fanwo, insisted that it was effective in checking for coronavirus cases.

“In fact, we built our self-assessment app hosted at kogicovid19.gov.ng around the NCDC’s checklist for ‘suspected and high risk’ cases and as at last week it has been visited nearly 200,000 times with over 14,000 completed self-assessments out of which only about 60 presented cause for further investigation which then failed to meet the COVID-19 spectrum,” he said in a statement issued in April 2020.

However, checks by this newspaper revealed that both the self-assessment portal and the app have been unavailable since the beginning of March 2021.

“Your request looks suspiciously similar to automated requests from spam posting software or has been deemed by a security policy configured by the website administrator If you believe you should be able to perform this request please let us know,” the query on both the application and website read.

“Both are even non-functional at the moment. Makes it so hard to access what the value could be. But then, it is some crap! No IOS version, App not functional, website non-functional,” Osungbade Wisdom, a tech expert consulted to evaluate the software, told our reporter.

According to the audited COVID-19 response and recovery expenditures submitted in September, 2020, the computer software for COVID-19 response gulped N90,720,000 out of N4.5 billion Kogi obtained from donations, loans and support from the federal government.

The financial records seen by PREMIUM TIMES were certified by the Accountant General of the state, Momoh Jibrin, and the Commissioner for Finance, Asiru Idris.

In the breakdown, the government initially budgeted N150 million for the computer software project but ended up spending N90.7 million, thus saving N59,280,000.

Meanwhile, when this reporter approached Telnet Technology Limited, the Abuja-based technology company awarded the project, it said a similar project will cost N300,000.

This reporter posed as a government official who wanted to replicate the same project in another state.

The Managing Director of the company, Daniel Idakwoji, disclosed that the Kogi State Government only signed a one-year contract with him, citing it as the reason the web portal and mobile application are no longer functional.

But he refused to disclose the amount paid by the state government.

“The contract is even on my table as we speak. The one we signed is for a year hosting and you know is a year already. It has expired.”

Upon request, Mr Idakwoji sent a proposal detailing how the company will execute the same project in less than a week.

From his portfolio, Mr Idakwoji’s company was, in the past, hired to build a couple of websites for the Kogi government, including the Ministry of Health and Governor Bello’s personal website.

When contacted, the state Commissioner for information, Mr Fanwo, did not specify the amount spent on the project but claimed it cost the government less than a million naira.

“What we spent was less than a million naira,” his text message read.

However, he refused to respond to questions on the software acquired for over N90 million, according to the audited financial report.

The state’s commissioner for health, Saka Haruna, has yet to enquiries on the project as of the time of filing this report.

Multiple telephone calls and text messages, which were confirmed to have been received by Mr Haruna, were not responded to.

A tech expert and social commentator, Olanrewaju Oyedeji, criticised the Kogi State Government, stating that such projects question the integrity of the administration.

“Installing the application and seeing the error message displayed shows the shoddiness of work done in that regard. Assessing the application deployed by the state and the website puts to question the sum of N90 million said to have been spent on its development.

“This reminds us of the outrage that greeted a similar development by former governor of Lagos State who built a website for a reported N78million.

“Our internal experts at Tech Mirror also analysed the platforms and noted that the price tag on the platform, given the quality, speed, interface and reality check, is questionable.”

He said the development shows the extent of wrong handling of projects especially for technical tasks such as applications and website development.

Like Loading...
Previous Adamawa State Polytechnic shut over students protest.
Next Unemployment: You Are Part Of The Rot, Femi Adesina Hits Back At Atiku