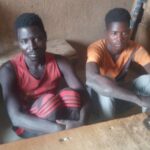 The statement revealed that the suspects, before their arrest, severally blocked the highway linking Zing and Mayo Belwa local governments of Taraba and Adamawa States and robbed innocent travellers of their belongings.

While commending the DPO of Mayo-Belwa and his men for making it difficult for these criminals to escape arrest, the Commissioner of Police, CP Aliyu Adamu Alhaji, psc* directed discreet investigations into the case for proper prosecution.

Equally, the CP has directed the State Command’s Anti Robbery Squad and Operation Farauta to go after these criminals everywhere within the State and calls on people to always report any suspicious movement around their neighbourhoods to Police.

In a related development, the Adamawa State Police Command has deployed four thousand and eighty-six (4,086) security personnel for water-tight security for high visibility patrols in all the twenty-one local governments of the State for this year’s Easter celebration.

The Commissioner of Police, CP Aliyu Adamu Alhaji, psc*, ordered the 24/7 water-tight security and directed all the Divisional Police Officers and their supervisory Area commanders to ensure a peaceful celebration.

They are also to ensure that personnel deployed are adequately supervised for utmost Professionalism in the discharge of their duties.

He warned that any acts bordering on indiscipline, extortion, intimidation of travellers, and incivility to public members, the Police would not be condoned.

While congratulating Christians in the State as they join other Faithfuls across the globe to celebrate the symbolic anniversary of the resurrection of Christ, the CP expressed profound appreciation to the Government and good people of Adamawa state for their support to the Police in the fight against crimes in the State.

And assured them of improved police service delivery and security in general.