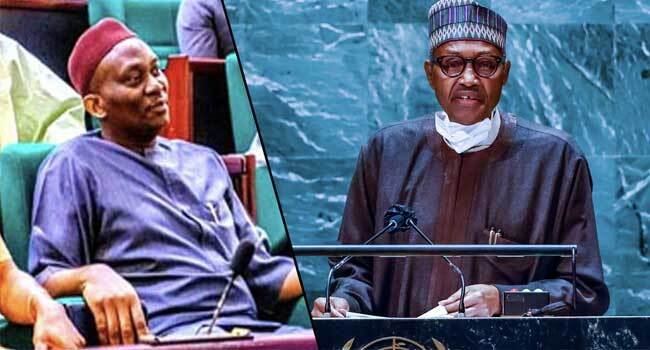 The minority caucus in the House of Representatives has faulted President Muhammadu Buhari’s recent speech at the United Nations General Assembly, claiming Boko Haram terrorists were emboldened under his watch.

In a statement, Minority Leader of the House of Representatives, Ndudi Elumelu, said the caucus had extensively reviewed the President’s address at the 76th session of the UNGA, noting that it is in “complete disagreement with the ugly reality of the failures of his administration, as well as the economic, security and social ruins that have confronted the nation under his watch”.

Elumelu said the caucus was “alarmed by President Buhari’s report to UNGA that terrorists have been so weakened in Nigeria that they are now preying on soft targets, when in reality, insurgents have become so emboldened under his watch”.

According to the statement issued on Saturday, the insurgents are now attacking military formations, kidnapping and killing the nation’s gallant officers while overrunning communities and murdering our citizens without restraint.

As representatives of the people, the Minority caucus expressed regret that  President Buhari’s speech did not reflect on the kidnapping and killing of students in Nigeria.

The opposition lawmakers argue that Buhari did not reflect the closure of schools and crippling of education in some parts of the country, where normal life has been destroyed by terrorists, neither did it show any empathy towards the victims of terrorism attacks.

“Our caucus is worried that in reflecting on violent conflicts, Mr. President’s address conveyed no personal commitments that can guarantee an end to poor and undemocratic governance, human rights abuses, poverty, ignorance, injustice and inequalities, that are prevalent under his watch, even after identifying such as the causes of conflicts,” Elumelu said.

“Also, the minority caucus is shocked by the claims in Mr President’s speech that his administration “built” isolation centres and emergency hospital wards, ‘all over the country’ ‘in record time’ in the fight against COVID-19; a claim that is in conflict with the infrastructural reality in the country.

On the 2023 general elections in the country, the opposition accused the President of lacking what it described as definite personal commitments towards a credible electoral process.

The Minority caucus, therefore, asked President Buhari to always cross-check the content given to him by his handlers so as to ensure that his position, especially on the world stage, captures the reality as well as aspiration prevalent in the country.

This to them is because such addresses ought to serve as an unblemished working document for interventions and solutions at various levels of governance.