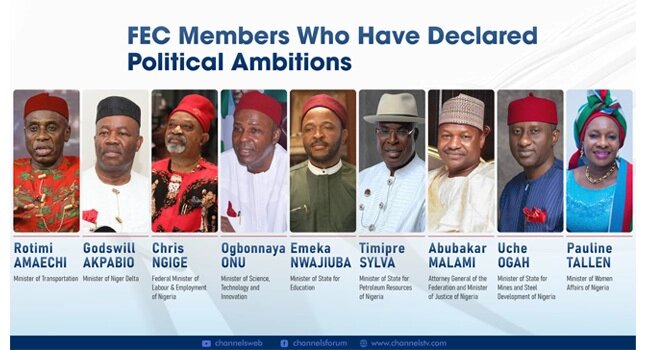 President Muhammadu Buhari on Wednesday ordered all members of the Federal Executive Council (FEC) running for elective offices to submit their letters of resignation.

This, the president did, in trying to ensure that members of his cabinet abide by the tenets of the constitution.

According to Section 84(12) of Nigeria’s Electoral Act 2022, no political appointee at any level shall be a voting delegate or be voted for at the Convention or Congress of any political party for the purpose of the nomination of candidates for any election.

Bearing this in mind, President Buhari directed that FEC members with political ambitions must submit their resignation letters on or before Monday the 16th of May, 2022.

Based on their political declarations, here are those who are directly affected by the president’s latest directive:

1. Abubakar Malami (Minister of Justice and Attorney General of the Federation)

The powerful AGF recently declared for the Kebbi governorship seat. However, if this ambition is to come to fruition, then he will have to swiftly see to the legal nullification of the clause in Section 84 (12) or otherwise tender his resignation.

Amaechi in April announced his interest to contest the presidential election in 2023.

While addressing a crowd of supporters and leaders of the All Progressives Congress (APC) at an event in Port Harcourt, the minister in a speech titled ‘Forward with Courage’, said his 23 years of service in various capacities have equipped him with great experience in governance and public service.

“After more than two decades in the public arena, I had wanted to go on a holiday and spend more time with my family before charting a new course outside politics, but at 56 … I am compelled by the urgency of our present challenges to place my experience and proven capacity at the service of the nation at the highest level,” Amaechi said.

Now with his principal’s new instruction, the minister will either tender a resignation letter with courage or join the fight to rewrite the constitution.

Akpabio,  who was a former governor of Akwa Ibom State, told a large crowd at the Ikot Ekpene Township Stadium that his declaration is uncommon and a trumpet call for unity and action.

He further promised that he will not let Nigeria “sink”. So, it is expected that Akpabio will not allow his presidential ambition to plummet, but the question remains what option will he opt for?

Dr Ngige has had different battles as a minister, having to deal with industrial actions from various quarters. However, these challenges have not deterred him from seeking to become President.

Ngige says he has a burning desire to see a prosperous, united, and equitable Nigeria. Let’s see how intense his aspirations are and if he will be willing to resign and follow the path of his heart.

It is not unusual that Dr Onu seeks to become President of Nigeria, after all, there are indications that in 2023, the seat might be zoned to the South.

The minister while declaring his intention a few days ago, said Nigerians have the key to unlocking the prosperity of the nation.

For him, this key is a knowledge economy driven by science, technology, and innovation.

With the little clause set by President Buhari, it will be interesting to see what the highly knowledgeable minister will do, and how much he is willing to sacrifice to become Nigeria’s “Chief Servant”.

The Academic Staff Union of Universities (ASUU) are on strike and Nigerian students are home, their educational future put on hold, but that’s another kettle of fish.

Perhaps this is why Hon Nwajiuba is seeking to become president; who knows the answer to transforming Nigeria’s education sector might come from him when he gets to Aso Rock.

He seems very ready for the task ahead as he became the first minister to resign.

For Ogar, the goal is to become the next governor of Abia State. It’s an ambition that the oil magnate has been chasing for quite a while now.
He has contested for the seat twice, first under the Peoples Democratic Party and the ruling All Progressive Congress.

Ogar will be hoping that the third time will be the charm but that’s only if he is able to scale the little hurdle that Buhari’s new directive poses. Nigerians will be watching to see if this minister is truly made of ‘steel’.

Mrs Tallen has her eyes on a clime outside the executive pedestal. She is gunning for a Senatorial seat in Plateau State, the South precisely.

Reports suggest that the incumbent Senator, Prof. Nora Dadu’ut, might not be running for the position come 2023, hence, paving the way for the minister to throw her hat into the ring.

Like others before her, there is an opportunity cost. In her case, many would believe that forgone cost will be worth it in the end.

Time will tell what actions will follow, now that the president has made his stance clear on the matter of being in his cabinet and nursing a political ambition come 2023.