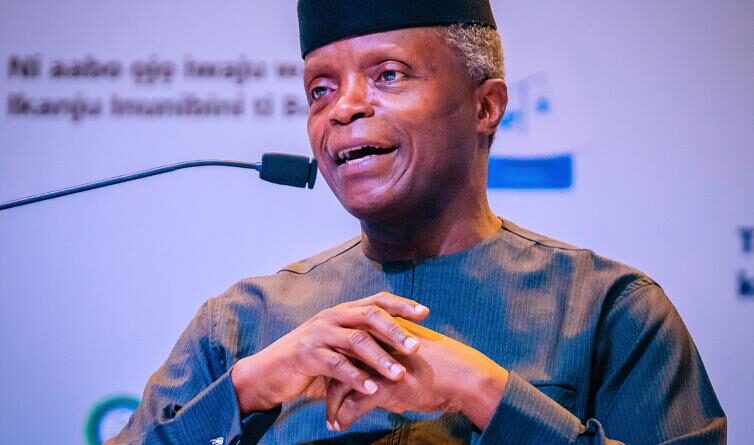 Vice President Yemi Osinbajo on Tuesday was formally presented with the award for Leadership Person of the Year 2021 at the Leadership Newspapers’ Annual Conference and Awards ceremony in Abuja.

In January, Osinbajo had been named the Leadership Person of the Year 2021, alongside the Director-General, World Trade Organization (WTO), Nigeria’s Dr. Ngozi Okonjo-Iweala.

The newspaper had noted in its citation that the VP is a worthy recipient of the award “for his key role in steadying the ship of state through the storms as well as laying the foundation for the social intervention programmes of the current administration.”

Speaking at the event, after receiving the award, the Vice President noted that we must also create a country that can provide, “by means of an effective social welfare scheme, a safety net for the very poor and the vulnerable; a united and tolerant nation where all, irrespective of ethnicity, religion or political persuasion, are respected, treated fairly and justly, and have equal access to all opportunities.”

The VP added “we must build a Nigeria where a boy or girl does not say that, ‘I am from the South-West, or I am from the North-West, or South-South or North-East, or North-Central or South-East, but that I am a Nigerian, a citizen of one of the greatest and most prosperous nations on earth.

“This is the kind of Nigeria that those of us in this political tendency, to which Sam Nda-Isaiah belonged, all attest to and believe.”

Osinbajo dedicated the award to “millions of Nigerians who believe in this new Nigeria, and who retain faith in our possibilities as a people and are doing their best every day in their various corners to build this nation through honest endeavour.”

“To these people of goodwill who are working hard to promote peace, tolerance and to build a country that truly represents all of our dreams; to those working hard to build bridges, those who have refused to be frustrated or even wearied by the trials of our country as it grows and continues into the fullness of its manifest destiny.”

According to him, “it is because of such Nigerians, that despite the great challenges we are passing through on our march of progress, I am certain that we will build this great Nigerian nation that we all yearn for.”