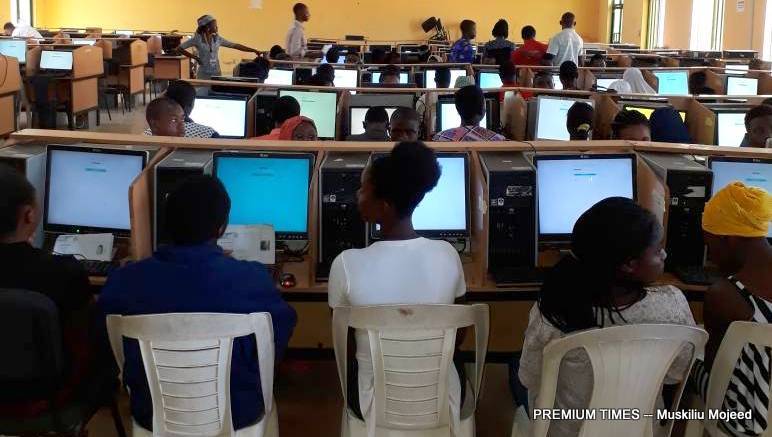 The Joint Admission and Matriculation Board (JAMB) and Police Service Commission (PSC) have denied reports that candidates for the recent police recruitment exercise wrote an examination in Arabic language.

it was reported how the candidates for police recruitment wrote the qualifying examination nationwide on May 25 being part of the series of tests for their enlistment into the Nigeria Police Force (NPF).

The Christian Association of Nigeria (CAN) believed the reports and said presence of Arabic in the examination was a deliberate attempt to undermine Christians.

In a statement issued on Tuesday by its spokesperson, Adebayo Oladeji, the Christian group restated its earlier claim that there was an Islamisation agenda by the current government.

“In the 2018 Appropriation Bill, the federal government reportedly appropriated over N600 million in the 2018 budget for execution of capital projects at the National Board for Arabic and Islamic Studies (NBAIS), just as it has committed N200 million to rehabilitation of the board’s buildings ceded to it by the government,” the statement said

According to Mr Oladeji, the display of the Arabic language questions came as a rude shock to many Christian youth who sat for that examination.

“Many could not recover from the setback until JAMB logged them out of the CBT platform. Obviously achieving the aim of the Islamic extremists who are hell bent on fostering their religion and culture on the Nigeria Police Force,” he said.

The spokesperson claimed the examination instructions require the candidates to answer 180 questions viz- Use of English 60; Arabic language 40; Fine Arts 40; and Agriculture 40.

The association said the most appropriate action is to cancel the exams and conduct a fresh one devoid of controversies.

“CAN demands evidence of cancelation of the examination and fixing of date for a retake within 72 hours of this notice,” the statement said.

” And why Arabic language, even if they claimed it is alphabetic abracadabra, why not Accounting that comes before Arabic in Alphabetical order? How can Arabic language come before Accounting and Agriculture”, the statement said.

But a statement made available to journalis on Wednesday morning, signed by the Chairman PSC, Mike Okiro, and the JAMB registrar, Ishaq Oloyede, said the assessment was based “only” on aptitude and language test under the heading “English Language test for 45 minutes.”

“The instructions were that candidates should answer the questions in that section alone,” the statement said.

According to the statement, JAMB customised platform contains skeletons of other 22 subjects offered by the board.

“On completion of the 45 minutes test, any candidates who rolled down would come across subjects listed in alphabetical order of the 23 subjects with the first 3 being Agriculture, Arabic and Arts “, the statement said.

It described as false the claim that “180 questions (instead of 60) were to be answered in English, Agriculture, Arabic and Arts in 45 minutes!!!”

“The only Nexus among the three is letter ‘A’. The Nigeria Police Force does not require Agriculture, Arabic or Arts.

“No candidate was ever required to answer questions or assessed on any of the three subjects as shown by the results already released,” the officials said.

Similarly the spokesperson of JAMB, Fabian Benjamin, explained the reason the candidates could not have seen Accounting questions alongside Agriculture and Arabic.

He said what the board examines candidates on is “Principles of Accounting and it comes under letter “P” and not Accounting ‘A’ as claimed by CAN.

“First it’s wrong to insinuate that the board doesn’t know what alphabetical order is simply because the writer felt accounting should come before the subject listed,” he said

According to him, it is appreciative to note that CAN confirmed that the board had instructions as to which subject to be answered by the candidates.

“This recruitment exercise as the board was told would reflect federal character principles which means every state would be give it dues as the results from the examination clearly showed that every state has a reasonable number of candidates with what is required for selection.”

Mr Benjamin said the fear of any state or section of the country being deprived is clearly unfounded.