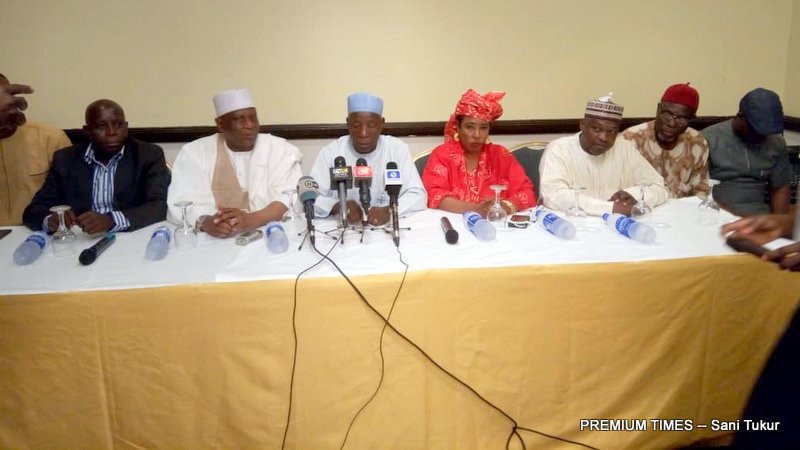 Buba Galadima on Monday has advice President Buhari not to contest in 2019, Galadima told newsmen that  President Buhari is fated to lose the 2019 election, adding that if the President knew what awaited him, it would have been better for him not to go into electoral contest at all. “With what I know, I can tell you that President Buhari will not only this election, he will lose his deposits. Let us not forget that the man we will be facing is a military general. We are ready, prepared to take on this fight despite their intimidations and threats. “I know him but if I was his adviser, I will tell him not to contest,” Galadima said even as he reminded parties to the alliance that the APC has set aside huge sums of money to buy them over in the months leading to the general polls. Representatives of the ADC and former governor of Osun State, Prince Olagunsoye Oyinlola on his part described the coalition as “an assignment from God,” even as he urged the parties to be committed to the letters and spirit of the MOU. He said: “We are committed to restructuring of this nation and we must respect the spirit and letters of this understanding. ” When Nigerians voted in 2015, they thought the APC vehicle will take them to the promised land. But three years after, the APC has failed and failed tragically too.” Former Secretary to the Government of the Federation and Minister of Finance, Chief Olu False lamented what he termed the “gross incompetence” of the APC-led government and tasked all parties to the alliance to team up in supporting not only a sole Presidential aspirants but sole governorship candidates, Senatorial candidates as well as House of Representatives candidates across all states of the federation. “All our votes must go to the Presidential candidate and to the governorship, senatorial and House of Representatives in every state of the federation. “It is not sufficient to produce the President alone because if we have a President who does not have majority of seats in parliament, there will be challenge as to what the President would be able to do,” he noted. Parties that signed the MOU were the Action Alliance (AA), Alliance for Democracy (AD), Africa Democratic Party (ADC), Action Democratic Party (ADP), All Grand Alliance Party (AGAP), Action Peoples Party (APP), Advanced Congress of Democrats (ACD), Better Nigeria Progressive Party, Democratic Alternative (DA), Democratic Peoples Party (DPC), Grand Democratic Party of Nigeria (GDPN), Green Party of Nigeria (GPN), KOWA Party, Labour Party (LP), Mass Action Joint Alliance (MAJA), Masses Movement of Nigeria (MMN). Others included the National Conscience Party (NCP), New Generation Party (NGP), National Unity Party (NUP), Nigeria Intervention Movement (NIM), Peoples Alliance for National Development and Liberty (PANDEL), Peoples Progressive Party (PPP), People for Democratic Change (PDC), Peoples Democratic Party (PDP), Providence People’s Congress (PPC), Reformed All Progressive Congress (RAPC), Restoration Party of Nigeria (RPN), Social Democratic Party (SDP), Unity Party of Nigeria (UPN), All Grassroots Alliance (AGA), National Interest Party (NIP), Nigeria Democratic Congress Party (NDCP), Progressive Peoples Alliance (PPA), and Young Democratic Party (YDP) among others. Baraje, Melaye return One of the highlights of the wells attended event was the formal return to the PDP of its former Acting National Chairman, Alhaji Abubakar Kawu Baraje and the lawmaker representing Kogi East, Senator Dino Melaye. While thanking the PDP for accepting him back in its fold, Baraje said a prodigal son regardless of his sins, would always be received with joy upon repentance from his sins. “We went astray but we are back now. If a child burns one of his fingers, he quickly retreat the others. I will like to thank you for accepting to take us back,” he said. Like Baraje, Melaye said he had the option to flow with the crowd but chose to return to PDP to remain politically consisted, saying come 2019, “President Buhari will fail because he is entitled to failure. Dignitaries at the event included former Vice President, Atiku Abubakar, ex-Senate President, David Mark, the governors of Gombe and Akwa Ibom States, Ibrahim Dankwambo and Udoh Emmanuel respectively. Others were Senator Liyel Imoke, Gbenga Daniel, Ibrahim Mantu, Tom Ikimi, Zainab Maina, Ike Ekweremadu and Chief Bode George.