The All Progressives Congress has released details of the types of primaries approved for its various state chapters.

The list shows the APC approved direct and indirect primaries for different states.

In many states where the state governors are in battle with rivals such as senators and other influential politicians, the ruling party appears to have favoured the stance of the governors. Such states include Adamawa, Kaduna and Imo.

In Adamawa, top politicians like the former Secretary to the Government of the Federation, Babachir Lawal, and former anti-graft commission, EFCC chairman, Nuhu Ribadu, had requested directed primaries while the party leadership backed by incumbent governor Bindow Jibrilla called for indirect primaries. The APC national headquarters approved the indirect primaries.

See the statement by the APC headquarters listing the form of approved primaries for states below.

The National Working Committee (NWC) of the All Progressives Congress (APC) has approved the mode of primaries for Saturday, September 29th, 2018 governorship primary elections scheduled to hold across the thirty-six states of the federation and the Federal Capital Territory (FCT). 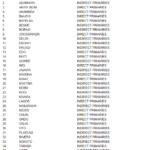