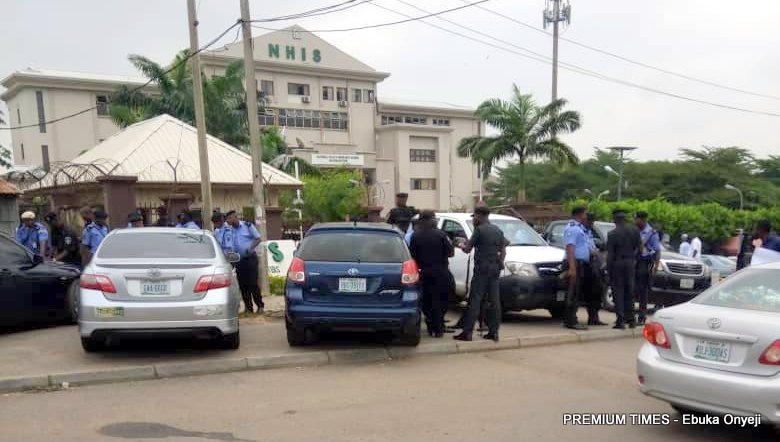 Monday morning’s barricade of the Abuja head office of the National Health Insurance Scheme (NHIS) by workers was triggered by information the suspended executive secretary would ignore his suspension order and resume work, some leaders of the workers’ union have explained.

Thursday’s suspension of Usman Yusuf by the governing council snowballed into a melee in the early hours of Monday when workers of both Abuja offices of the NHIS had a face-off with the embattled official and his entourage at the gate of the agency.

The workers with a handful of security personnel had formed a barricade but were overpowered by about 50 police officers Mr Yusuf stormed the office with. They were tear-gassed and harassed by the police in the confrontation.

As the executive secretary forced his way in, the workers downed tools and protested throughout the working hours of the day, calling on President Muhammadu Buhari to do the ‘needful’.

“We came out because the suspended ES had bragged before everybody and circulated information that he was going to be in the office today (Monday) and we felt he is suspended and he should stay away from office so we came around to stop him from illegally gaining entrance into his office.

“But he came with over 50 policemen who broke the chains and forced the gate open after teargassing some of our members.

“Personally, I was hit in the leg by one of the cars in Mr Yusuf’s entourage. By coming to the office in that manner despite being suspended shows he’s defiant and this made the staff feel insecure.

“We cannot go into the office to work and we can’t work with him. There is an acting ES which we feel should be running the scheme, for now he is not allowed to sit down and work and this is why we protested.”

Mr Achi, a principal manager at the scheme critcised Mr Yusuf for not being “law abiding” by obeying the council’s directive.

“He feels the only person that can give him orders is the President. He feels nobody can challenge him.”

When asked if he believes the governing council had such powers, the official answered in the affirmative.

“This is not the first time a governing council is going to suspend an executive secretary. In April, the Vice Chancellor of the University of Dutsema, a presidential appointee, was suspended too. The council is only saying step aside let us find out what and what has been said about you, the veracity of it.

Mr Achi said he believes persons in the presidency ‘blocks’ letters and petitions to the president on Mr Yusuf’s alleged misconduct.

“We have written a lot of petitions to the president but what we are told is that there is someone in the presidency that always block our petitions from reaching the president and that was why the chairperson had said if President Buhari knows a tenth of Yusuf’s atrocities, he will throw him out.

“The needful is for the President to remove Mr Yusuf and bring in somebody who can salvage this agency which is at the brink of collapse,” Mr Achi noted.

“We acted on the grounds of the public service rule that says any public official suspended must stay out of office. But what we discovered today (Monday) was that he came in with so many policemen and bungled (sic) his way in.

“Now, our position is that we call on the president to let the three months investigative panel set up to do it’s work. If he is not found guilty then he come back to his office.”

The Minister of Health, Isaac Adewole, had earlier reacted to the latest controversy trailing the scheme. He said though he was yet to be properly briefed, the Nigerian government is taking appropriate steps to restore peace in the scheme.