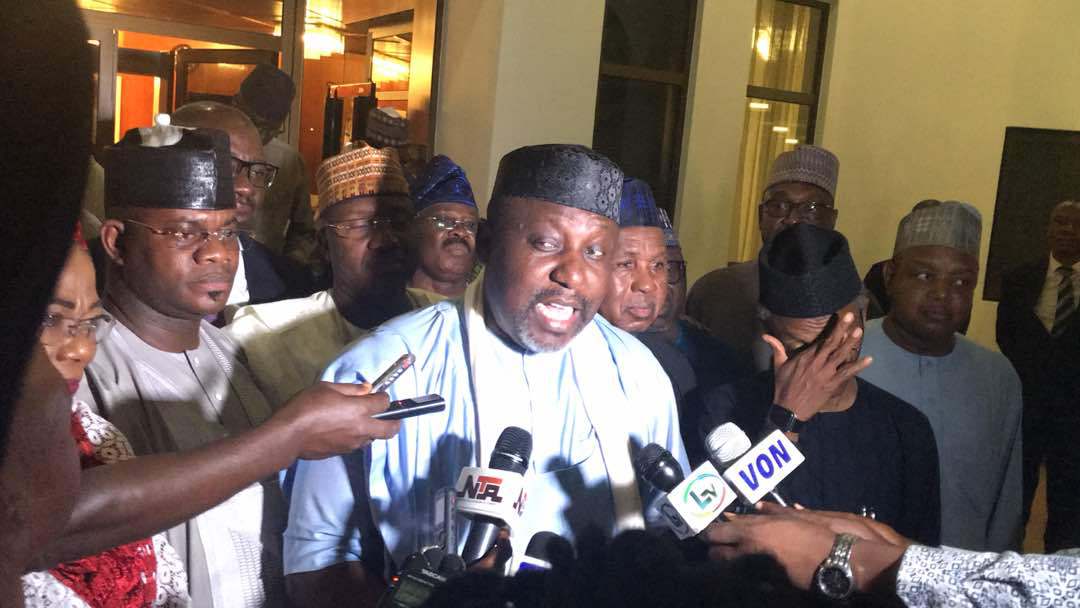 he Governor of Imo State, Rochas Okorocha, has said that the national chairman of the governing All Progressives Congress (APC), Adams Oshiomhole, is destroying the party by his handling of the primaries to select candidates for the 2019 elections.

Mr Okorocha, who chairs the APC governors’ forum, spoke in an interview with State House correspondents on Thursday after meeting with President Muhammadu Buhari.

He said he has confirmed from the president that Mr Oshiomhole does not have the backing of the presidency.

The Imo governor spoke a day after a national leader of APC Bola Tinubu gave his backing to Mr Oshiomhole. Mr Tinubu also spoke after meeting the president.

Q: What brought you to see the president and what did you discuss?

Okorocha: Gentlemen of the press, I am here to clear the air that the presidency is behind what Oshiomhole is doing in some of the states and which has affected our party negatively. And from my understanding from Mr President, there is no such directive for Oshiomhole to do anything illegal or create any sort of injustice. So, Oshiomole is on his own in this whole thing. There is no presidency’s support for him to refuse candidates who won elections and give wrong candidates who didn’t win election. This is the matter and I will simply say that he is not with the consent of the presidency, he is on his own.

I also requested that Oshiomole must learn to respect the rule of law and obey court orders where they apply. This issue of treating court orders as tissue papers must stop, it doesn’t reflect well, the image of our party, he must act quickly to fix the integrity of this party because his coming in ought to have brought joy into the party and not sadness.

Q: Is the APC disintegrating?

Okorocha: Well, APC will not disintegrate for as long as the person, Muhammadu Buhari, is still the President of the Federal Republic of Nigeria, and remains the leader of this party. So we cannot give that credit to the chairman. He cannot disintegrate this party, the party is still intact, just that many people are hurt. Since his inception and after this primaries, we are losing almost five million voters because of anger, protest everywhere and he needs to be called to order, he has to respect the rule of law, respect court orders and do the right thing – obey court orders where applicable and not turn himself into INEC.

Q: Tomorrow is the last day for the submission of candidates, what is the true position regarding Imo State. Is it that Oshiomhole is siding with Hope Uzodinma?

Okorocha: He cannot be standing on Hope Uzodinma because that man did not win election, you cannot compare somebody who won 265,000 votes with somebody who won 7,000 votes. He (Hope Uzodinma) never won the election and you cannot impose a candidate who is unacceptable to the people, that is how serious the matter is now. So he (Oshiomole) should do the right thing and I have advised him severally to do the right thing before he creates more disaffection in our party.

Q: It was reported today that the National Working Committee of the APC has submitted the name of Hope Uzodinma to INEC, what is the implication sir?

Q: Yesterday, the National Leader of your party, Tinubu came here and said Oshiomole is a good man, he is working well and those who are angry should just join hands with him to build the party, are you saying that Tinubu himself is supporting the wrong candidate?

Okorocha: No, may be he is being misinformed, if he is properly informed he will not say what Oshiomole is doing is the right thing.

Q: There is a rumor making the rounds that you are planning to join SDP?

Okorocha: SDP? How can I build a house and leave it for someone else? I am in APC, I founded the APC, I gave the name APC and so this is our party and we must continue with the party and build the party for victory.