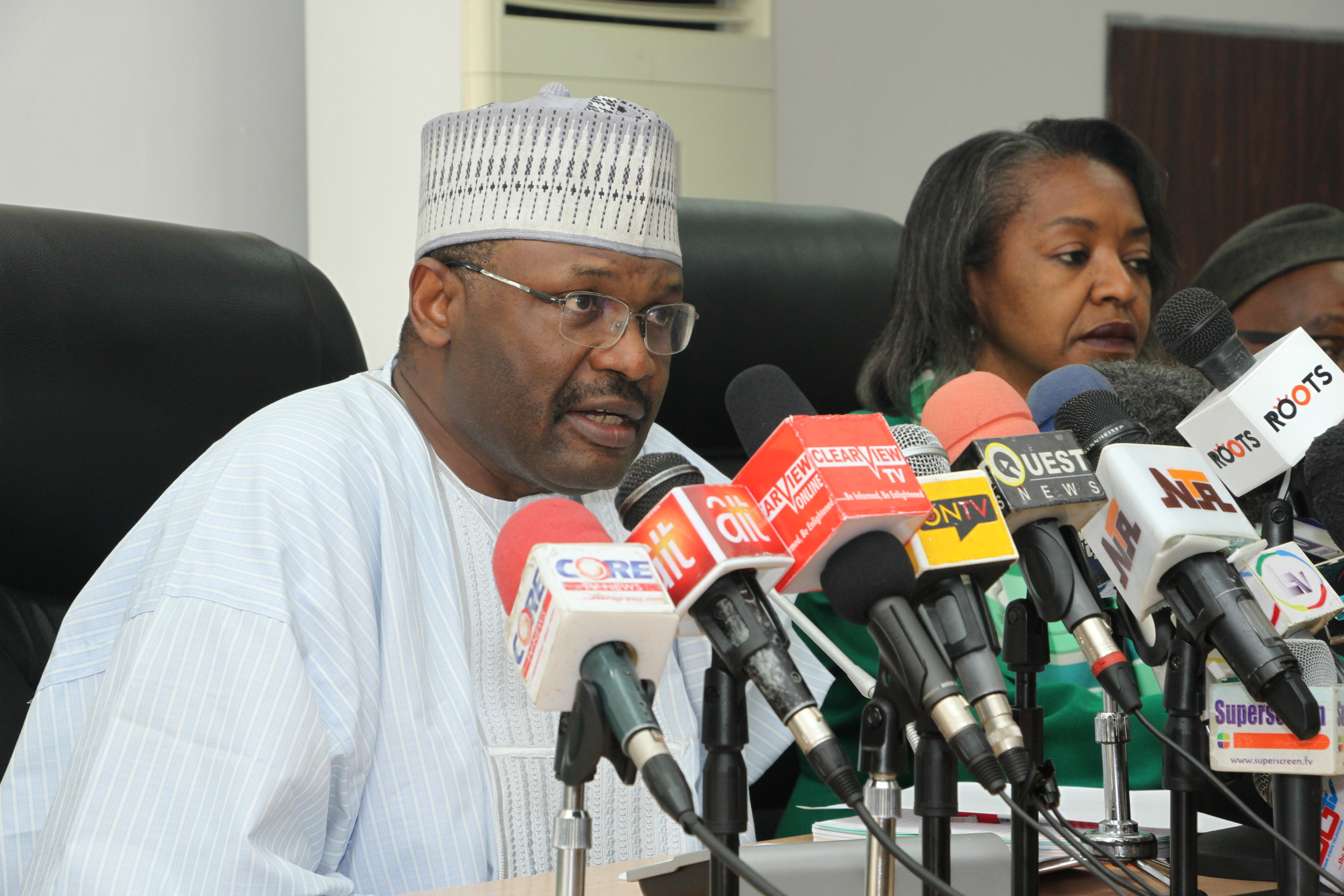 The Independent National Electoral Commission (INEC) has published the personal particulars of Candidates nominated by their political parties for the Presidential and National Assembly elections.

The Commission has also concluded arrangements for the display of the National Register of Voters at all polling units across the country between November 6 and 12 for claims and objections in accordance with the provisions of the law.

Speaking at a media briefing in Abuja on 26th October, the INEC Chairman, Prof. Mahmood Yakubu said: “You will recall that on 9th January 2018, the Commission released the timetable and schedule of activities for the 2019 general elections. Fourteen activities were identified based on the provisions of the 1999 Constitution (as amended), the Electoral Act 2010 (as amended) as well as the Commission’s guidelines and regulations.

“Three of the 14 activities have been implemented. On 17th August 2018, the Commission published the official notice for the 2019 elections nationwide as required by Section 30(1) of the Electoral Act. This was immediately followed by primaries for the nomination of candidates by political parties from 18th August to 7th October 2018. Thereafter, parties submitted the list (Form CF002) as well as personal particulars of candidates (Form CF001) that emerged from the primaries for Presidential and National Assembly elections from 10th – 18th October 2018. The submission of nominations for Governorship and State Assembly elections is ongoing until 2nd November 2018.”

Prof. Yakubu averred that each candidate nominated by a political party must provide details of his or her particulars by personally completing the Form CF001 and swear an affidavit at the Federal High Court, a High Court of a State or the Federal Capital Territory.

His words: “Within seven days from the close of submission of these documents, the Commission is required to publish the Form in the constituencies that candidates seek to represent as required by Section 31(3) of the Electoral Act 2010 (as amended). This will give the general public the opportunity to view the affidavit of personal particulars of those who aspire to represent them.

“Any person with reasonable ground to believe that any information on Form CF001 submitted by a candidate contains incorrect or false claims is at liberty to file an action against such candidate at the Federal High Court or the High Court of a State or the Federal Capital Territory (FCT). While the current exercise is limited to candidates for Presidential and National Assembly elections, the personal particulars of those contesting in Governorship and State Assembly elections will be similarly published on 9th November 2018, one week after the close of submission of nominations by political parties.”

Prof Yakubu appealed to the general public to seize the opportunity to view the personal details of the candidates seeking to represent them. According to him, the forms, as completed on oath by the candidates and submitted to the Commission by their political parties have been pasted at the Commission’s state and local government offices nationwide.

“This is an opportunity for citizens to ascertain the personal details of the candidates to enable them take informed decisions on Election Day or even initiate legal action against candidates who they believe have made false claims on their Forms,” he said.

The INEC Chairman said that the planned display of the National Register of Voters for each polling unit across the country would take place between 6th and 12th November for claims and objections by citizens in accordance with the provisions of Section 20 of the Electoral Act 2010.

He said that while Commission had cleaned up the register using the Automatic Fingerprint Identification System (AFIS), it was also the right of citizens to examine the register and exercise their civic duty by drawing the Commission’s attention to the prevalence of any ineligible persons, to assist it to further clean the register up.

He said: “For emphasis, eligibility to register and vote in Nigeria is open only to citizens who have attained the mandatory age of 18 years and resident in the places they registered. Such citizens must also not register more than once. The Commission will also appreciate the assistance of citizens in identifying deceased persons on the register so that such names can be nulled from our record. It is also an opportunity to correct misspellings of personal details such as names, age and gender.

“I wish to once again place on record that the voter register is robust. It is also the largest database of citizens in Nigeria containing names, photographs and biometric details. It is a national asset that should be protected and perfected. Ownership of the register by citizens and their involvement in cleaning it up is crucial to our electoral process. I urge citizens to help the Commission during the display. Full details of the procedure for collecting citizens observations will be released shortly.”