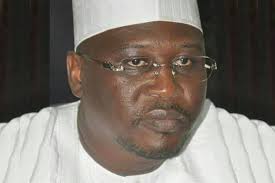 Gov. Jibrrila  Bindow of Adamawa State has finally put an end to Fintiri’s lies and deception, Fintiri is known for his penchant for deceiving the electorates that the Governor refuse to pay their salaries since his administration, in a statement signed by the Special Assistant to the Governor on Press & Media Affairs, Martins Dickson, the Governors aide frown at Fintiri’s campaign slogan of ‘Bindow is owing Adamawa workers’, now that the salary issue is cleared, what will Fintiri hold on to again? His deception has come to an abrupt end by the joyous mode of the workers now.

The statements read in parts: The attention of the Adamawa State Governor has been drawn to a news report on Gotel Television where the Governorship candidate of the people’s Democratic Party (PDP) in the State; Ahmadu Fintiri said the future of Adamawa State workers is not guaranteed.

We want to say here that the PDP candidate is beginning to shiver and quake because the only campaign issue he has held unto since declaring his ambition for Governorship has been flushed into the gutters by Senator Muhammed Umaru Jibrilla Bindow, the best performing Governor in the history of Adamawa State.

In a statement signed by the Special Assistant to the Governor on Press & Media Affairs, Martins Dickson, Bindow says the PDP candidate should scout for another campaign issue. Borrowing is not wrong as long as it is for the right reasons and repayment mode fine-tuned to address all extremes. Moreover the state legislature has given approval.

How can someone reasonably say the future of Adamawa State workers is not guaranteed because their salaries are been cleared? Where is the logic in this statement? Bindow queried. Moreso that the salary arrears in question was inherited from previous administrations of which the PDP candidate was a part both as a legislator and an acting Governor.

Is the PDP candidate expecting us not to explore available options of clearing the inherited salary arrears? Initially the issue was local government salary arrears are not been paid, and now that we have commenced payment they are complaining.

Bindow emphasized that he has a responsibility towards all Adamawa workers and he will do everything possible to see that he provides for their legitimate right as long as he (Bindow) has the means.

He called on everybody to rally round the Government as it makes effort to meet the needs of its workers and also provide basic and social infrastructure to all in the state.

You have all seen what we have practically done in just 3 and half years in terms of development, we do not owe the State workers a dime in salaries and we have commenced payment of local Government salary arrears which we inherited, we are also doing so much to pay pensions and gratuity in batches as we get funds. All these we have achieved amidst scarce resources. Be sure that we are poised to do better beyond 2019.

Senator Bindow stated that the PDP candidate’s statement is a ploy to distract the Government and deceive the people, we refuse to be distracted, we will pay all arrears and continue to uphold the welfare of Adamawa workers at all levels.