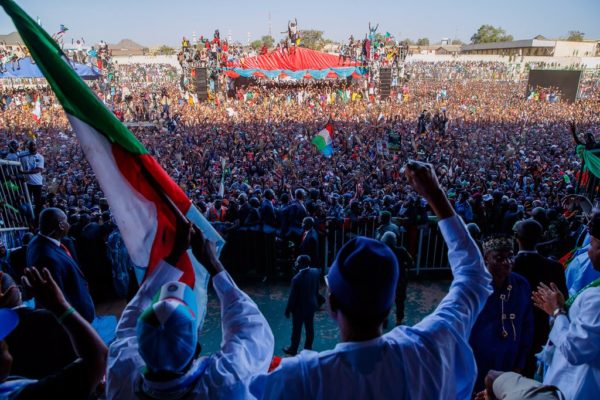 President Muhammadu Buhari received some political heavyweights from Peoples Democratic Party into the All Progressives Congress in Jos, capital of Plateau today, where a surging crowd of party enthusiasts told him his re-election is assured.

After the rally, Buhari in a tweet expressed appreciation to the people of Plateau, who turned out in large numbers to welcome him in Jos.

“I can’t thank Plateau State enough for the overwhelming reception today. There were so many excited people, that I didn’t get a chance to address you. Thank you for your faith in us, & steadfastness over the years. We will not let you down, even as we seek another mandate from you”, he wrote.

The Rwang Pam Township Stadium, venue of the event, was jam-packed by ecstatic party supporters, who kept hailing the man they love and admire.

So much was the tumult that the President could not eventually address the crowd.

After waiting for about an hour waved at the appreciative crowd, and left for Abuja.

In a statement released after the rally, President Buhari lauded Plateau people for turning out in their thousands to welcome him into Jos, lining the roads right from the airport, defying the raging sun.

He also thanked them for their steadfastness over the years, and for continued faith in the administration, which was indicated by the turnout at the stadium.

President Buhari, however, stressed the need for greater restraint from teeming supporters and appreciative Nigerians in other campaign stops ahead.

He pleaded with the supporters to always allow the campaign programme run as planned, since it is also an opportunity for him to give a stewardship report.

He said: “We have been serving you for about four years, we want another four years mandate from you, it is needful for you to allow us give you a report. You deserve it.’’

The statement was released by media adviser, Femi Adesina.

Ministerial list: I will only appoint people I know – Buhari

Tinubu Is Supporting Buhari To Preserve His 2023 Presidential Ambition – Saraki

Buhari orders probe over killing of police officers by soldiers