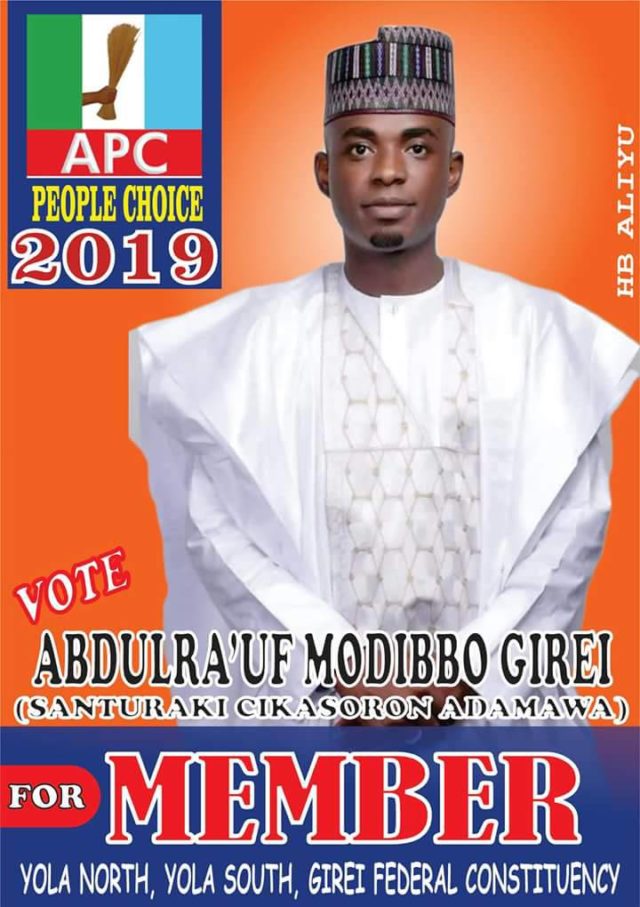 Justice Inyang Ekwo of the Federal High Court sitting in Abuja has nullified the election of Abdulrauf Modibbo into the National Assembly as a member representing Yola South/Yola North/Girei Federal Constituency of Adamawa State.
Modibbo has declared the winner of the All Progressives Congress’ primaries held on October 7, 2018, in Yola, and eventually represented the APC in the 2019 general elections, which he won.
However, his closest challenger, Mustapha Usman had alleged that Modibbo falsified his age and was not eligible to contest the APC primaries.
Despite Usman’s allegation, the APC accepted Modibbo’s nomination form and allowed him to contest the party’s primary election, which he eventually won.
Modibbo’s name was subsequently forwarded to the Independent National Electoral Commission by the APC.
Apparently not happy with the way Modibbo was imposed on the party in his constituency, Usman filed a suit challenging his emergence and seeking his disqualification as APC candidate for Yola North/Yola South/Girei Federal Constituency.
Usman’s joined the APC and INEC as defendants in the suit.
Delivering judgement on the suit on Friday, Justice Ekwo declared that Modibbo was not qualified to contest the APC primaries as well as the 2019 House of Representatives election for Yola North/Yola South/Girei Federal Constituency.
Consequently, the court held that the plaintiff (Modibbo) “Is lawfully winner of October 7, 2018, APC primaries and candidate of the party for Yola North/Yola South/ Girei Federal Constituency of Adamawa state.
Justice Ekwo stated that the plaintiff had successfully proven beyond a reasonable doubt that the 1st defendant (Modibbo) falsified his age severally in order to contest the election.
The court also noted that the plaintiff proved that Modibbo submitted the forged age certificates for the purpose of contesting party primaries.
Moreso, Justice Ekwo found out that the 1st defendant was a serving National Youth Corps member when he contested the primary election.
The court stated that the action of the 1st defendant breached section 4 of the NYSC Act 2004, and should be discouraged from happening.
“A person who is a lawbreaker cannot be a lawmaker. This illegality is one that cannot be wished away” Justice Ekwo said.
Apart from dismissing the preliminary objection filed separately by the 1st and 2nd defendant, the court held that the Modibbo ought to have filed his defence after seeing the evidence tendered before the court by the plaintiff.
Even though the 1st defendant could not offer a cogent explanation on the forgery allegation, the court said the burden of proof was still on the plaintiff to discharge.
However, Justice Ekwo was of the firm view that the plaintiff had discharged the burden of proof following his oral testimony of any other documentary evidence tendered before the court.
Consequently, the court declared  “That going by the depositions of the 1st defendant contained in the various affidavits and documents deposed to or signed by the 1st defendant, Abdulrauf  Abdulkadir Modibbo; some of which he submitted to the 3rd  defendant, the Independent National Electoral Commission (INEC), as contained in FORMS CF001, CF002 and the affidavit thereto, the 1st defendant’s personal information as to his actual age and primary school certificate therein is false and forged.
The court also declared that “The 1st defendant Abdulrauf Abdulkadir Modibbo, is not qualified to have been nominated as the 2nd defendant’s All Progressive Congress (Party) candidate for the Yola South/Yola North/Girei Federal Constituency of Adamawa state in the 2019 general elections.
In addition, Justice Ekwo declared “That in view of the disqualification of the 1st defendant Abdulrauf Abdulkadir Modibbo, the plaintiff Mustapha Usman who polled the 2nd highest votes in the primary election of the 2nd defendant, All Progressives Congress (party) for the Yola South/Yola North/Girei Federal Constituency of Adamawa State which held on the 7th day of October 2018 is the lawful winner of the primary election and therefore the candidate of the APC for the Yola South/Yola North/Girei Federal Constituency of Adamawa State for the 2019 general elections.
More so, Justice Ekwo gave an order  directing the 2nd and 3rd defendants to immediately replace the name of the 1st defendant Abdulrauf Abdulkadir Modibbo, with that of the plaintiff Mustapha Usman, as the lawful candidate of the APC for the Yola South/Yola North/Girei Federal Constituency of Adamawa State for the 2019 general elections