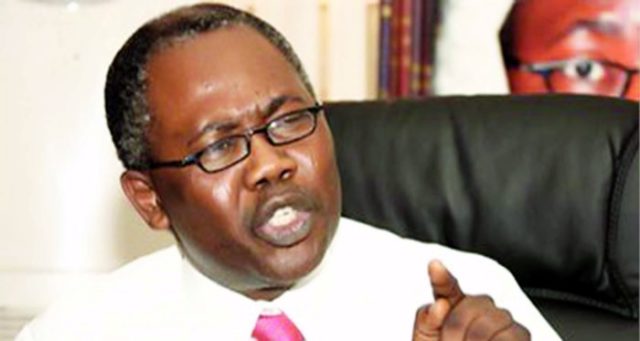 The Federal Capital Territory High Court has granted the Economic and Financial Crimes Commission (EFCC) permission to detain the former Attorney-General of the Federation and Minister of Justice, Mohammed Adoke (SAN), for another 14 days.

Justice Othman Musa on December 20, granted the EFCC an initial 14 days to detain Mr Adoke to complete investigation, which elapsed on Thursday.

Mr Adoke was handed over to the EFCC by International Police Organisation (INTERPOL) upon arrival from Dubai, the United Arab Emirates on December 19 and taken into custody for his alleged involvement in the granting of the Oil Prospecting License (OPL) 245 to Shell and ENI.

According to a statement by the Head, Media & Publicity of the EFCC, Wilson Uwujaren, the fresh application was granted by Justice Musa in preparatory to Adoke’s arraignment.

Justice Musa, while granting the application, stated that “the extension of the remand of the respondent for another 14 days for the purpose of his arraignment in court is necessary and granted as prayed.”

The former AGF who has been away from the country stalled the trial forcing the anti-graft agency to obtain an arrest warrant against them on April 17, 2019.

Justice A.O. Musa of Federal Capital Territory High Court, Abuja, on Thursday, January 2, 2020, granted the application of the Economic and Financial Crimes Commission, EFCC, to keep the former attorney general and minister of Justice, Mohammed Bello Adoke in its custody for additional 14 days preparatory to his arraignment.

In granting the application, the judge stated that “the extension of the remand of the respondent for another 14 days for the purpose of his arraignment in court is necessary and granted as prayed.”

The Commission took custody of Adoke on December 19, 2019, upon his arrival from Dubai, United Arab Emirates.

Adoke who fled the country in 2015, has pending criminal charge of alleged abuse of office and money laundering in respect of the granting of the Oil Prospecting License (OPL) 245 to Shell and ENI.

It would be recalled that the government of former President Olusegun Obasanjo revoked the OPL 245, which the late General Sani Abacha granted Dan Etete, his then Petroleum Minister, and reassigned it to Shell Nigeria Exploration and Production Company, SNEPCO.

Etete’s Malabu Oil and Gas, however, reclaimed the oil block in 2006 through the court. While Shell challenged the decision, a ‘fraudulent settlement and resolution’ was consummated under President Goodluck Jonathan’s government, with Shell and ENI buying the oil block from Malabu in the sum of $1.1billion.

Investigations by the EFCC into the deal revealed crimes that border on conspiracy, forgery of bank documents, bribery, corruption and money laundering to the tune of over $1.2 billion against  Malabu Oil and Gas Limited, Shell Nigeria Ultra Deep (SNUD), Nigeria Agip Exploration (NAE) and their officials, culminating in criminal charges against Adoke, Etete, and others, which are pending in both the FCT High Court and the Federal High Court, Abuja

The absence of the defendants slowed the prosecution of the suspects, forcing the EFCC to obtain an arrest warrant against them on April 17, 2019.

Adoke, however, arrived the country on Thursday, December 19, 2019, from Dubai, United Arab Emirates into the waiting arms of EFCC operatives at the Nnamdi Azikiwe International Airport, Abuja.

His return has now cleared the way for him to answer to the charges against him.

Justice Musa adjourned the case to enable its assignment by the Chief Judge.

INVESTIGATION: Gov. Fintiri keep mum as most Streets of Adamawa remain in darkness; despite...