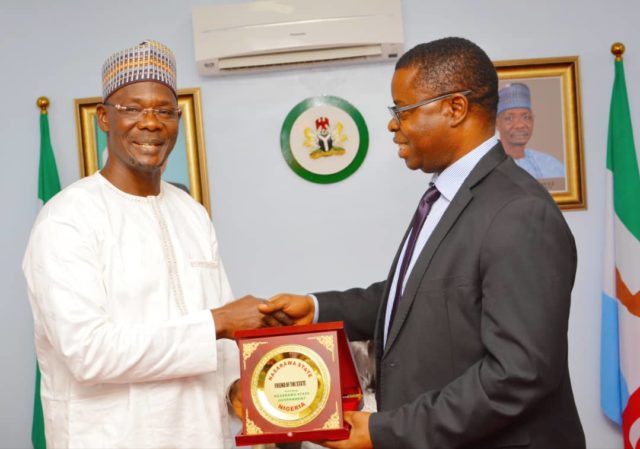 Irked by the slow pace in implementation of the Nigeria Erosion and Watershed Management Project (NEWMAP), Nasarawa State Governor, Engineer Abdullahi Sule has threatened to sack members of the project team if they failed to move to the project office in Karu.

Engineer Sule handed down the threat when he recently hosted representatives of the World Bank, as well as NEWMAP national officials on a spot assessment visit, at the Government House.

The Governor, who was miffed by the inability of the state to utilize funds at its disposal, having already committed over N500 as counterpart funds, directed staff of NEWMAP in the state to either  immediately move to the project office in Karu or leave the job.

Reacting to the comment by the World Bank Representative, Dr. Amos Habu, a Senior Environmental Specialist, suggesting that the NEWMAP project activities in Nasarawa State is slow, Engineer Sule warned that he will not work with staff who are slow in discharging their responsibilities.

“By the time you finish your assessment and your review, we will sit down with them, we will take a decision. “For the few time that I’m here, we will do things, we will move in the direction that we are going,” he stated.

The Governor lamented that the state was only able to utilize N700m out of the $2m in the project account, mostly attributed to the slow pace of activities and especially the project is unwinding in 18 months.

“Those who are slow don’t work with me. They have no time working with me, they don’t have to waste their time pretending because there is no need for that.

“When it comes to commitment, we will meet our commitment,” Engineer Sule stated.

The Governor expressed dismay that some NEWMAP staff are refusing to relocate to the project office in Karu mostly for personal reasons.

“They don’t need office in Lafia, they need an office in Karu, where we have GIS set up, we have all the mapping of the state, we have everything done.

“All they need to do was move and I am sending this message to them right now, move or get out, so other people who can afford to move to Karu will come in,” he said.

In his opening remarks, Dr. Amos Abu, the World Bank representative, said the team was in Nasarawa State to give on the spot support to the NEWMAP team in the state so they can move quickly.

Dr. Abu disclosed that compared to the pace of the project across 23 states of the federation, NEWMAP activities in Nasarawa is slow, mostly because of the lack of implementation of activities.

“We cannot afford to be moving at the pace the state is currently moving. I said this because of the objectives of the project itself. It will help you to address erosion, flood, other natural disasters,” he stated.

According to the World Bank specialist, because activities are not being implemented, the state is not able to draw sufficient money from the project account.

“Today, the state has only received two million dollars, out of this we still have 1.3m dollars in the project account. This is a vivid pointer to the slow pace of activities,” Dr. Abu said.

While noting that the project has less than 18 months to close, Dr. Abu said his team will do what they call deep diving with the NEWMAP team in the state, with a view understanding how they can move things faster than it is currently.

Also speaking, Dr. Salisu Dahiru, NEWMAP National Coordinator, said they were in the state to meet with the project team in Nasarawa, with a view to looking at the books, data and operational issues on ground, in order to identify bottlenecks and deliver solutions.

Dr. Dahiru added that Nasarawa, being one of the vibrant states that is contiguous to Abuja, has suffered lots of deforestation, either through creation of human habitat or industrialization, stressing that there is need to provide opportunities for the state to recover some of these natural resources.

APC’s Senators-elect Charges to Unite and Vote for Ahmed Lawal as next Senate President.