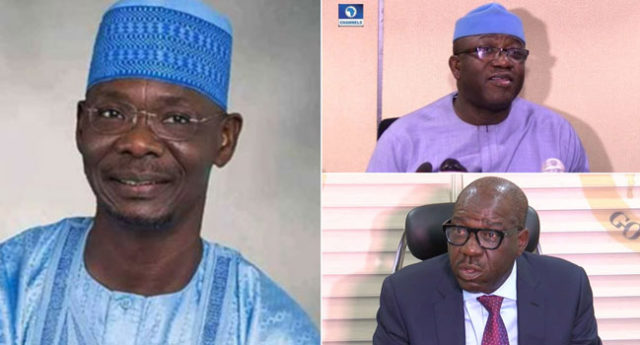 As the number of  COVID-19 cases in Nigeria continues to rise, some governors have taken initiative to self-isolate, following their meeting with some persons who have tested positive for the Coronavirus.

The lastest in the list of governors who have gone into self-isolation is the Nasarawa State Governor, Mr Abdullahi Sule.

Nasarawa State’s Commissioner of Health, Ahmad Yahaya disclosed this to Journalists in Lafia, the state capital on Wednesday.

According to Mr Yahaya, the governor is going into self-isolation following his physical contact with persons who have tested positive for the Coronavirus including the Chief of Staff to the President, Abba Kyari.

The commissioner added that the governor’s close aides and the deputy governor have been informed to also self-isolate.

Yahaya, however, declined comments on whether or not the governor’s blood sample has been taken to test for the virus.

Governor Sule is said to have had contact with Abba Kyari on March 14, at the wedding ceremony of the son of the Inspector General of Police.

In a similar vein, the Edo State Governor, Godwin Obaseki announced that he is going into self-isolation following physical contact with Bauchi State Governor, Bala Muhammed and Chief of Staff to the President, Abba Kyari, who have both tested positive for COVID-19.

The Edo State Governor said he has sent his samples for testing to verify his status with regards to the deadly virus which is giving the nation serious concerns.

Similarly, Ekiti State Governor Kayode Fayemi also on Wednesday announced via his official Twitter handle that he is now in self-isolation after attending meetings with two persons who have tested positive for the deadly virus.

He, however, urged everyone in Ekiti State to not despair, stressing that all is currently under control.

FG to begin construction of dry ports in Abia, Plateau, others – ICRC