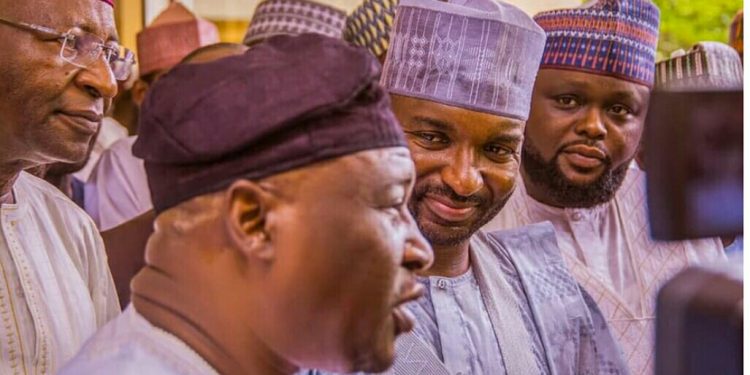 The African Democratic Congress (ADC) has dismissed a report that 10,000 members of the party defected to the opposition Peoples Democratic Party (PDP) in Adamawa state.

The leader of the party and the governorship candidate of the party in the last general election in Adamawa state, Sen. Abdul-Aziz Nyako said the claim by the PDP and Fintiri is of doubtful success, laughable and a terrible absurdity as it would have been impossible to assemble 10,000 people in any location at this period of the coronavirus pandemic without the attention of the public.

Nyako has on Wednesday, June 17, blasted the PDP in the state and the Fintiri led government while debunking the claim of mass defection which he considered as a farce of a non performing desperado when the government and the PDP ought to have joined in mourning over the consequences of insecurity, via his official Facebook handle.

“They created a storm in a tea cup with nothing at stake and blew it out of proportion for propaganda purposes by claiming that there have been mass defections from the ADC to the PDP today,” Nyako said.

“ADC Adamawa has created an enabling political environment for the PDP led Government in Adamawa to govern in political peace for the benefit of our people but they seem to be more keen on politicking rather than leadership.

“They created a storm in a tea cup with nothing at stake and blew it out of proportions for propaganda purposes by claiming that there have been mass defections from the ADC to the PDP today.

“Why heat up the polity and waste resources unnecessarily at this time when there is nothing politically at stake until 2022-2023 rather than focusing on the needs of our people?

“What is very unfortunate is that they even had the audacity to have a political programme for defection, barely a month after the massacres at Tingno-Tito; and barely 10 days after the loss of lives and property in settlements around Lafiya-Lamurde; at a time when many of our people are mourning!

“This seems to be a re-incarnation of Emperor Nero playing the fiddle while Rome was burning!

“Is this Administration serious at all?

“PDP Adamawa would hear from us (ADC) InshaaAllah,” The Nyako