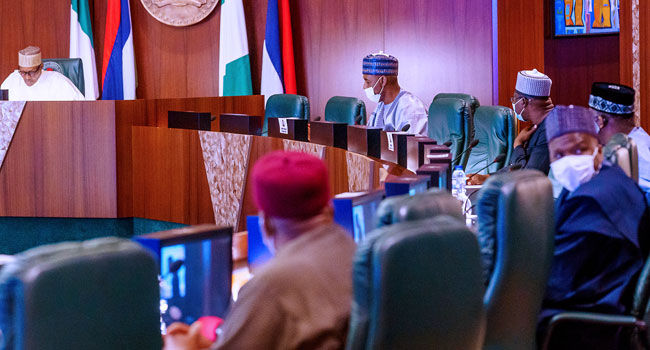 State governors in the north-eastern part of the country have identified some of the root causes of the insurgency raving the region.

They stated this on Monday in Abuja at a meeting with President Muhammadu Buhari to discuss ways to intensify the war against insurgency.

The Chairman of the North-East Governors’ Forum, Babagana Zulum of Borno State, who led the governors to the Villa, stressed the need for the Nigerian government to address the root causes of the insurgency.

According to him, the insurgents are taking advantage of endemic poverty and hunger among other challenges in the region to recruit more members into their fold.

Briefing State House correspondent at the end of the meeting, Zulum said, “One of the root causes is access to farmlands. People need to go back to their farmlands; people need to be resettled in their original homes so that they can start their means of livelihood.

“This is one of the reasons why insurgents are recruiting more (members) into their sects and creating an enabling environment for people to go about their normal activities will no doubt reduce the cases of insurgencies.”

“We also recommended that the police should be provided with state-of-the-art equipment, armoured personal carriers among others, with a view to bridging the manpower gap that we are having in the Nigerian military,” the governor added.

He also stressed the need for the Federal Government to work closely with the state and local governments with a view to providing solutions that would end the crisis in the region.

Governor Zulum, however, noted that the government was taking a bold step to ensure the best ways to tackle some of the challenges faced by people in the North East.

Members of the Boko Haram terrorist group and the Islamic State in West Africa Province (ISWAP) have carried out a series of attacks on communities in the region over the years, leading to the death of thousands of residents and forceful ejection of millions of others from their homes.

While the military said it has recorded many feats in the onslaught against the insurgents, the state governors in the region, who were apparently disturbed by the recent activities of the non-state fighters, met with the President.

Earlier, at the meeting, President Buhari gave strong assurances that security would be restored to Borno State, the North East, and the nation at large.

The President’s assurance, according to a statement by his spokesman, Garba Shehu, follows the recent adoption of new strategies and the acquisition of modern military equipment.

“Things will improve very soon. We are acquiring modern equipment; some are here, some are being cleared, and others still coming.

“We need patience with acquisition of equipment. You need to train the trainers for their usage ahead of their deployment to the field,” President Buhari was quoted as saying in the statement.

He added, “I assure you, the north-east governors, especially that of Borno, that we go to bed and wake up thinking about you, how to secure our country; that is the responsibility of every government.

“Our party campaigned in 2015 on three major objectives, among which is Security. We said the same thing in 2019 and Nigerians believed us. We are doing our best and we will continue to do even better.”

The President decried the impact of the COVID-19 pandemic on the economy which he said has made scarce resources even scarcer, coupled with its severe impact on the supply chain of military equipment and spare parts.

He, however, stated that his administration was doing its best on the question of equipment and the military was aware that equipment were coming from some countries.

President Buhari lamented that the acquisition of military wares and spares was not an easy task.

‘We Will Not Relent’

The meeting was also attended by the Vice President, Professor Yemi Osinbajo, as well as the Chief of Defence Staff, the Service Chiefs, the Inspector-General of Police, and the heads of intelligence agencies.

Some of the attendees promised that things would get better soon and made a strong case for strengthening ties among the military, state governments, traditional institutions, and all communities and the residents of the region.

The Chief of Army Staff, Lieutenant General Tukur Buratai, gave an assessment of the current efforts, stressing that Boko Haram terrorists have been flushed out of all the states in the region, leaving Borno State as the last stop. 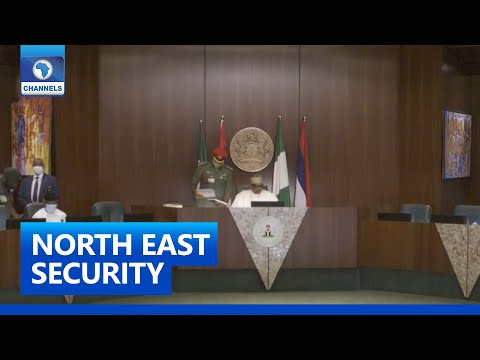 “There are no Boko Haram terrorists in neighbouring states.  They have been pushed out, and now cornered in Borno State.

“We are coordinating with civil and traditional authorities, mobilising and reinforcing and all we need is patience. We will not relent,” he said.

On his part, the Chief of Air Staff, Air Marshal Sadique Abubakar, briefed the meeting on the acquisition of military aircraft, stressing that the imminent arrival of Unmanned Aerial Vehicles, UAVs, known as drones with more than 10 hours of flying time, would strongly reinforce the battlefront.

Briefs were also received on equipment needs of the police, as well as the changing alliances between criminal gangs and terrorist groups in the region from the intelligence community.