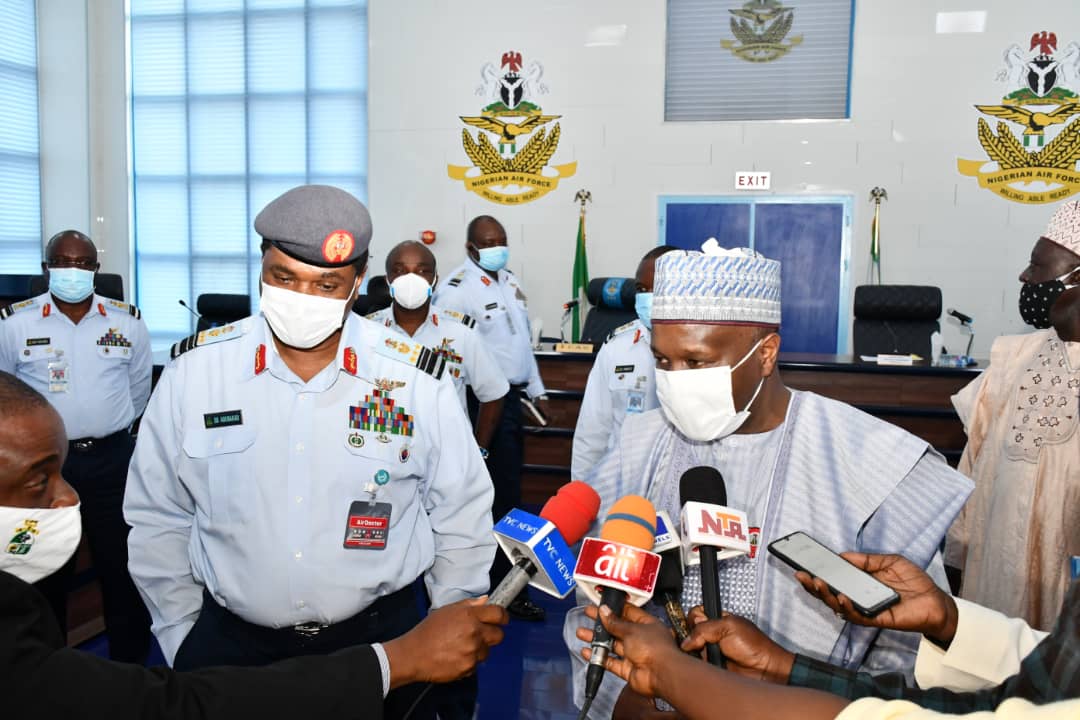 …As CAS reveals plan to set up school, medical facility, special unit in Gombe as part of FOB package

Gombe State Governor, Alhaji Muhammadu Inuwa Yahaya has again reassured the Nigerian Airforce that the State is well prepared to receive its men and platforms for the soon to be established Forward Operational Base, FOB in Gombe.

Governor Inuwa Yahaya restated this when he visited the Chief of the Air staff, Air Marshal Sadique Baba Abubakar at the headquarters of the Nigerian Airforce in Abuja.

The Governor said the centrality of Gombe State in the North East places it at a vantage position for the siting of the Forward Operational Base of the the Nigerian Airforce and other establishments that have to do with the sub-region.

He noted that locating the FOB in Gombe will help in boosting security in the North East and the country as a whole, adding that without security nothing can fundamentally be achieved.

The Governor further explained that the desire of the Nigerian state to advance the course of its people can only be achieved if lives and property are secured.

He said the determination of his administration to partner with the Nigerian Airforce towards the establishment of the FOB in the State was demonstrated in his prompt approval and allocation of 230 hectares of land for the project, adding that the State is ready to host officers and men of the force in Gombe.

He said the State is naturally endowed with minerals resources which include oil and gas recently discovered but this discovery the Governor added could attract criminal elements, hence the desirability of the FOB in the State.

The Governor assured the Nigerian Airforce of finding home away from home in Gombe because of the cooperation and understanding of the people of the State.

Earlier speaking, Air Marshal Sadique Abubakar said the Nigerian Airforce is working with other security agencies to ensure that the North East and indeed the entire country is safe and secure.

He said the Nigerian Airforce had in the last five years flown about twenty six thousand two hundred hours and nine minutes to protect the people of the North East.

Air Marshal Sadiq Abubakar disclosed that prior to the coming of the administration of President Muhammadu Buhari, the force had only two units in the North East sited in Yola and Maiduguri but that as at present the Airforce has established units in virtually all the states within the sub-region.

The CAS informed the Governor that NAF will also deploy a special unit in Gombe that will protect its assets and by extension support the improvement of security of the state, just as he disclosed plans to set up school and medical facility as part of the package for the establishment if the base.

He assured the Governor that a special team will be in Gombe for further engagements, adding that platforms to be deployed to the Gombe will arrive the state in October this year.