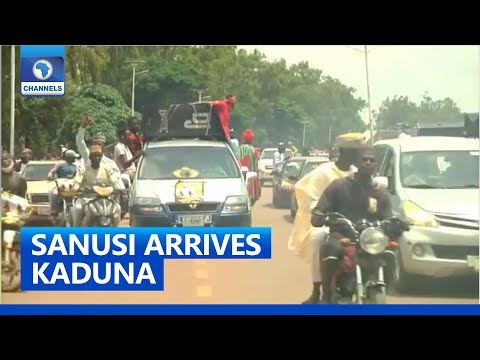 The former Emir of Kano Muhammadu Sanusi has arrived Kaduna state more than five months after he was deposed by Governor Abdullahi Ganduje of Kano state.

Sanusi’s visit to Kaduna state happens to be his first to any part of northern Nigeria since he was removed from the throne on March 9, 2020.

He is expected to visit Governor Nasir El-Rufai, his long time friend of over forty years at the Kaduna State Government House.

The former Emir on arrival in Kaduna was received by a crowd of supporters who joined his motorcade.

Some of them displayed 2023 campaign posters with his photograph on their vehicles.

His supporters believe he was sacked for opposing Mr Ganduje’s re-election last year.

Sanusi was seen as a reformist and had been critical of some government policies – a stance that frequently put him at loggerheads with ruling politicians.

Following his deposition, El-Rufai had met with the dethroned Emir of Kano, Muhammad Sanusi at Awe in Nasarawa State.

Governor El-Rufai had on March 13th, 2020, arrived Awe Local Government where Sanusi was residing then.

Due to a heavy security presence, journalists were only allowed to stay  200 metres away from the place.

Sanusi later left Awe for Lagos after a Federal High Court sitting in Abuja granted an interim order releasing him from detention in Nasarawa.

Justice Anwuli Chikere granted the order in line with the prayers on the exparte motion filed on behalf of the deposed Emir by Mr Lateef Fagbemi SAN.

The former Emir had approached the court seeking an interim order of the court directing his immediate release from detention.

Not disturbed by his dethronement, the former CBN governor said he was “moving on” with his life, but, admitted that challenging his removal could have been the easiest thing to do if he wanted to.

“I have done what I could in six years, I’m moving on. I don’t want to go back. The truth is, if I had wanted to go back, the dethronement letter was so badly written, it was not done professionally. The easiest thing is just to go to court.

“It’s a simple, fair hearing, ‘did you query him? Did you ask him to defend himself? Did you even call him to ask him any question?’ That’s all but I think we should go on to a new phase in life,” he said.