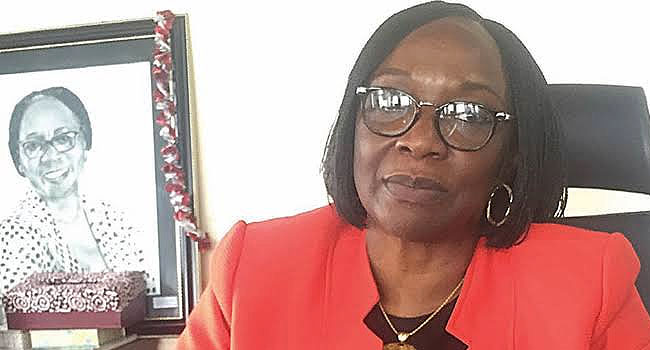 Senate members of the University of Lagos on Monday elected Professor Folasade Ogunsola as the acting Vice-Chancellor of the school.

Two Deputy Vice-Chancellors, one from Development Services and the other from Management Services, vied for the position.

Out of the 167 senate members who voted at the exercise, 135 voted for DVC Development Services while DVC Management Services got 31 votes, one voided vote was recorded.

The Senate Emergency Committee Chairman, Professor Chioma Agomo who spoke to Channels Television after the election said due process was followed in electing the new acting VC as directed by the Federal Government.

Professor Ogunsola until her election, was the Deputy Vice-Chancellor of Development Services.

She was the provost of the College of Medicine, University of Lagos.

Her research areas have been centered on the regulation and management of viral diseases, particularly HIV.

She is also the principal investigator at AIDS Prevention Initiative in Nigeria (APIN) at the University of Lagos and has been the chairman of the Infection Control Committee of Lagos University Teaching Hospital.

Furthermore, she is the chairman of the National Association of Colleges of Medicine in Nigeria.

Professor Ogunsola is expected to act in the new role until the outcome of the Special Visitation Panel set up by the President, Muhammadu Buhari.

This election follows the Federal Government’s directive that the University’s Pro-Chancellor and Chairman of Council, Wale Babalakin, and Vice-Chancellor, Prof. Oluwatoyin Ogundipe, recuse themselves from official duties, pending the outcome of the panel.

The Federal Government gave the directive last Friday in a press statement signed by the Federal Ministry of Education spokesman, Ben Goong.

It states, “Government also directs the Senate of the University of Lagos to immediately convene to nominate an acting Vice-Chancellor from amongst its members for confirmation by the Governing Council,” the statement added.

Babalakin’s Governing Council had, on August 12, sacked Ogundipe as Vice-Chancellor over alleged financial misappropriation and misconduct.

Ogundipe, however, rejected the Council’s decision, saying the University’s due process had not been followed.

The University’s Senate, alumni, and labour unions also put out statements saying the due process had not been followed.

But Babalakin, in several media reactions, insisted that due process had been complied with in terminating Ogundipe’s appointment.

The Presidential Panel, made up of seven members, is expected to determine whether the required steps were taken by the Council in sacking Ogundipe.

They are also expected “to make appropriate recommendations including sanctions for all those found culpable” in the investigation, which is expected to last for two weeks.

The panel will be inaugurated by the Minister of Education, Adamu Adamu, on August 26.