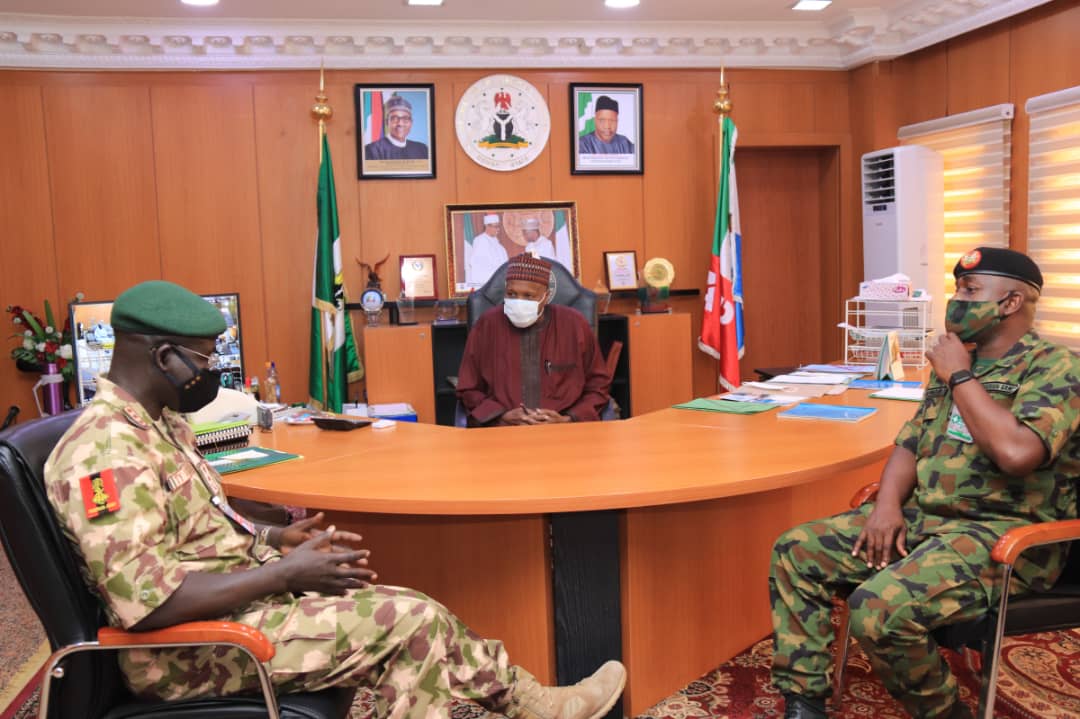 Gombe State Governor, Alhaji Muhammadu Inuwa Yahaya has praised the Nigerian Army for its relentless war on terror as well as other forms of criminality bedevilling the nation.

The Governor gave the commendation when he received the Chief of Army Staff, Lieutenant General Yusuf Tukur Buratai who paid him a courtesy visit at the Government House, Gombe.

He noted that the Nigerian Army has contributed immensely in restoring peace in the North East and the country as a whole, saying prior to the appointment of Lieutenant General Buratai as the Chief of Army Staff, the security situation in the region was precarious.

He said Buratai has distinguished himself through professional conduct which has led him to the peak of his career as a military brass.

“As a matter of fact, the Chief of Army Staff has done alot and we must express our happiness and pride that our son has reached the zenith of his career and has done so very well to Nigeria and the whole world”.

Governor Inuwa Yahaya informed the visiting Army Chief that Gombe has been a home for individuals fleeing crisis from neighbouring states of Borno, Adamawa, Yobe and Taraba, adding that the State Government has been providing succour to everyone who seeks refuge in the state.

He said in the spirit of support to the Nigerian Army and Nigerians, the Gombe State Government sacrificed its NYSC permanent Orientation Camp for use as a rehabilitation centre for repentant Boko Haram insurgents.

The Gombe State Governor said his administration will continue to support the Nigerian Army in carrying out its constitutional mandate of maintaining peace and protecting the nation’s territorial integrity.

On the Nigerian Army University Biu, Governor Inuwa Yahaya assured the Chief of Army Staff that his administration will partner the institution for the benefit of the people of the state.

Earlier speaking, the Chief of Army Staff, Lieutenant General Yusuf Tukur Buratai said he was in the state in furtherance of his operational tour of Army Units and formations, particularly those within the theatre of operation lafiya dole in the North East sahel and in the North West.

He commended the Government and people of Gombe State for their proactiveness in maintaining the peace in a zone that is bedevilled by security challenges.

Lieutenant General Buratai thanked the Governor of Gombe State for appropriating a large portion of land for the construction of the permanent site of the 301 Artillery Brigade Barracks.

He said the Nigerian Army is determined to end all forms of criminality in the country, calling on the people to partner the Army towards achieving the goal.

The Chief of Army Staff appealed to the Governor not to relent in supporting the Nigerian Army particularly the Nigerian Army University Biu which he said was established to address the educational needs of the people in the North East and the country as a whole.