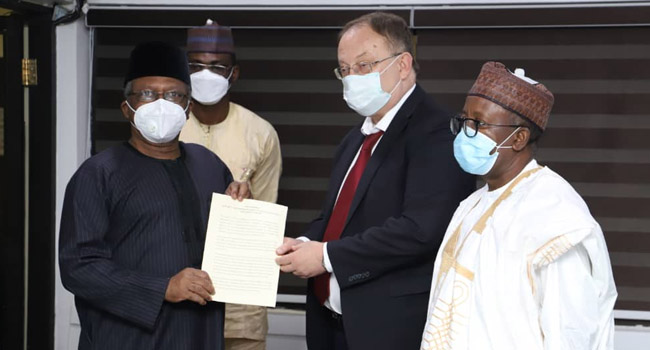 The Nigerian Government has received the samples of Russia’s COVID-19 vaccine.

Russia’s Ambassador to Nigeria, Alexey Shebarshin gave the samples of the COVID-19 vaccine to the Minister of Health, Dr Osagie Ehanire during a visit to the Ministry in Abuja on Friday.

The Russian Ambassador also handed over to the Minister an aide memoire which gives details about the vaccine to help the Nigerian Government conduct further research on it.

“We are exploring all knowledge in terms of therapeutics and vaccines,” the Ministry quoted Ehanire as saying.

“We are expressing our interest in the COVID-19 vaccine so that we will have the opportunity to work elaborately.”

He explained that the country has been taking part in a series of knowledge exchange and contact with several research bodies and nations in a bid to combat the COVID-19 pandemic.

Ehanire noted that the Embassy of the Russian Federation in Nigeria for the right of access, immediately the Russian COVID-19 vaccine was announced.

The Director of Hospital Services Department in the Ministry, Dr Adepimpe Adebiyi who was also present at the event said it is an opportunity to expand Nigeria’s vaccine production.

“The technical officers will interphase with the #Russian team in order to strengthen the relationship between Nigeria and Russia,” he said.

Russia had on August 11th, 2020, announced that it had developed the vaccine which has now shown some signs of success in early trials.

Patients involved in early tests of the vaccine developed antibodies with “no serious adverse events”, according to research published in The Lancet Friday, but experts said the trials were too small to prove safety and effectiveness.

Russia announced last month that its vaccine, named “Sputnik V” after the Soviet-era satellite that was the first launched into space in 1957, had already received approval.

This raised concerns among Western scientists over a lack of safety data, with some warning that moving too quickly on a vaccine could be dangerous.

Russia denounced criticism as an attempt to undermine Moscow’s research.