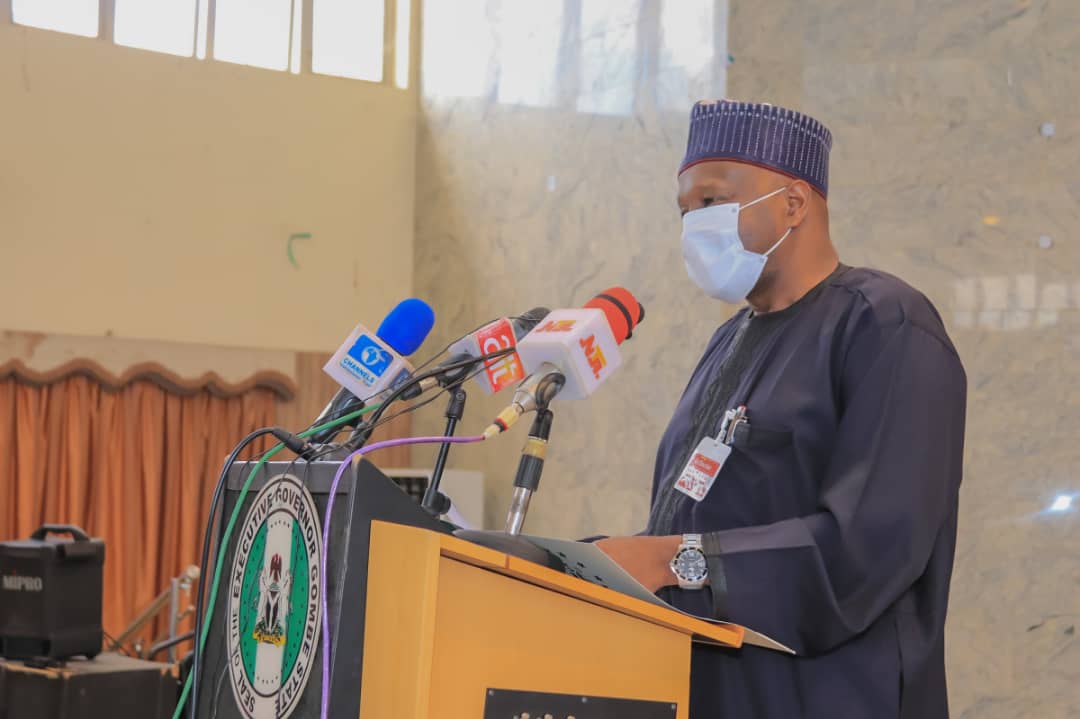 Desirous to ensure efficiency in coordination, management and integration of all reforms programmes in Gombe state, Governor Muhammadu Inuwa Yahaya today inaugurated the State Reforms Council and the Steering Committee to bolster activities of the civil service and place the state on the path of progressive development.

The State Reforms Council is to be headed by the Governor while the Secretary to the State Government, Professor Ibrahim Abubakar Njodi is to lead the Steering Committee.

Performing the inauguration ceremony at the new banquet hall of the Government House, Governor Inuwa Yahaya said the formation of both Committees was borne out of his administration’s concern on the welfare of the State work force and the decay in the system.

He described the civil service as the engine room of Government but regretted the neglect the service has suffered over time, leading to low capacity, lack of motivation, indiscipline and redundancy.

He added that his administration is determined to change the narrative.

He said another area his administration beamed its search light was the pruning of the over bloated Government Ministries from 27 to 21 in order to drive efficiency, foster great synergy, reduce cost of governance and improve service delivery.

The Governor said in as much as the covid-19 Pandemic has slowed down the effectiveness of the Reforms, his administration is still committed to the targeted goal.

The Governor said while the Bureau of Public Service Reforms is tasked with initiating reform programmes bordering on civil service, economy, governance and land among other areas, such initiatives must have to be vetted by the steering committee and approved by the State Reform Council.

Governor Inuwa Yahaya expressed confidence in the ability of the Bureau, the Steering Committee and the Reform Council to deliver on the much needed reforms to return the service to its former glory.

He thanked members of both committee for keeping fate with the current leadership calling on civil servants and public officials to cooperate and be productive as it is no longer business as usual.

Responding on behalf of both committees, the Secretary to the Gombe State Government, Professor Ibrahim Abubakar Njodi said in as much as reforms are a bitter peals to swallow, it has to be undertaken if the state must make progress.

“To who much is given, much is expected” the chief scribe affirms, assuring the Governor that the Committees will justify the confidence repose in them.

Members of the State Reform Council which is headed by Governor Muhammadu Inuwa Yahaya include the State Deputy Governor, Dr. Manassah Daniel Jatau, the Speaker Gombe State House of Assembly, Hon. Abubakar Sadiq Kurba, the State Acting Chief Judge, Justice Muazu Pindiga, the SSG, Professor Ibrahim Abubakar Njodi, Chief of Staff to the Governor, Alhaji Abubakar Inuwa Kari, Head of Service, Alhaji Babayo Yahaya and the immediate past Chairman of the committee on Review and Restructuring of of the civil service, Dr. Ibrahim Jalo Daudu while the Director-General, Gombe State Bureau of Public Service Reforms, Alhaji Daudu Kaltungo is to serve as secretary of the Council.

The State Steering Committee has the SSG as chairman while its membership includes the Head of civil service, the chairmen of Civil Service, Local Government, Teachers Service and Judicial Service Commissions.

Others include the Special Adviser to the Governor on Budget, Planning and Donor Agencies Coordination, Permanent Secretary Ministry for Local Government and Chieftaincy Affairs and his counterpart in Finance, State Accountant and Auditor Generals, Auditor General for Local Government, D.G Fiscal Responsibility Commission, Chairman Board of Internal Revenue service, Chairman Gombe State Investment and Property Development and the Senior Special Assistant to the Governor on Media and Publicity while the D.G. Bureau of Public Service Reforms is to serve as secretary of the committee.