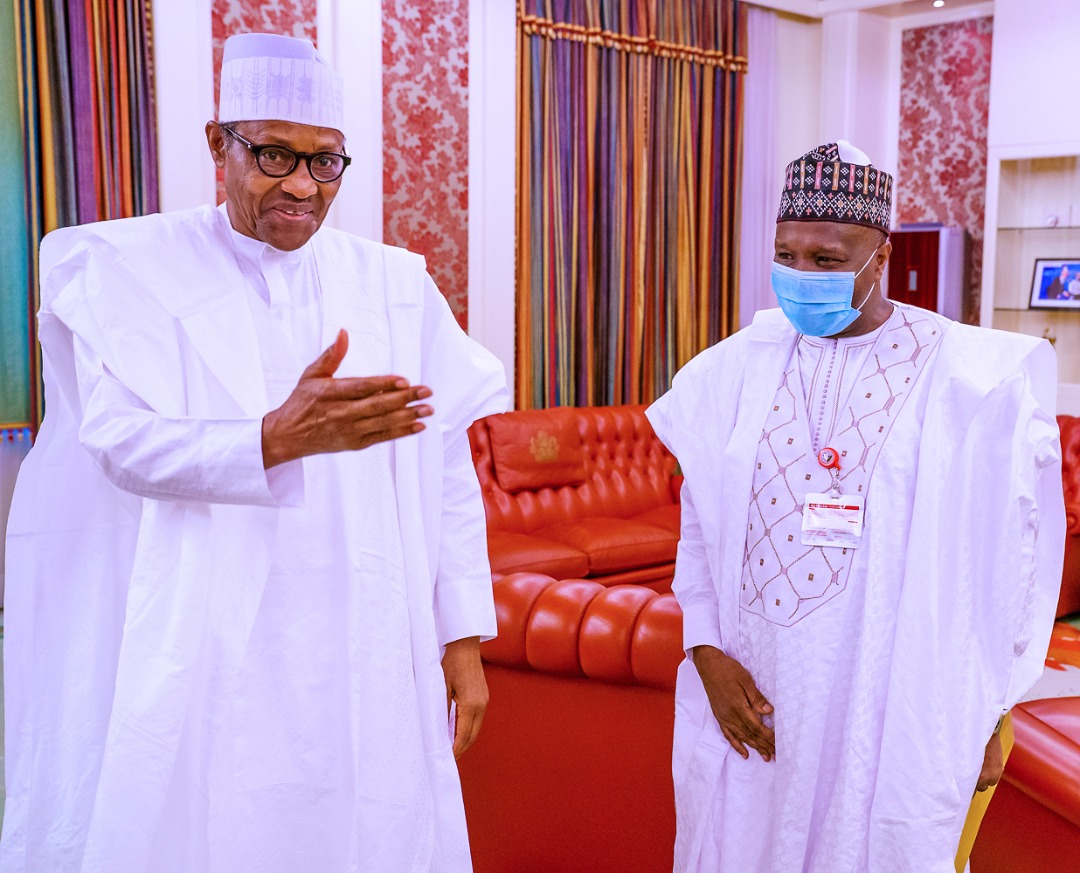 …seeks FG’s support to tackle menace of gullies in Gombe

Gombe State Governor, Alhaji Muhammadu Inuwa Yahaya has met with President Muhammadu Buhari where he made a case for the federal government to mount pressure on the Nigerian National Petroleum Corporation, NNPC and the Department of Petroleum Resources, DPR to begin the exploitation of oil and gas in the State as well as the whole of Gongola Basin so as to create job opportunities and boost economic activities in the north east sub-region.

Biefing State House Correspondents on the outcome of his meeting with Buhari at the presidential Villa in Abuja, the Governor said since the discovery of oil and gas in Gombe and Bauchi States and by extension the entire Gongola Basin, the people of the area are looking forward with high hopes to the commencement of oil exploitation which he noted will provide job opportunities for the people, enhance economic activities and create a launching pad for Gombe to join the league of oil producing States in the country.

“With the discovery of oil and gas in Gombe and Bauchi states, and specifically, in the whole of Gongola Basin, we seek to get the support of the federal government, so the pressure will be mounted on the Nigerian National Petroleum corporation, NNPC and the DPR for them to see to the fact that the exploitation of oil and gas deposit that is available in Gombe and in fact the wider Gongola Basin is encouraged so that economic activities will be triggered, our people will have jobs and Gombe will join the league of oil producing states.”

He also told said that the Dadin Kowa Hydropower has the potential of generating power to be used by the State and the soon to take off Gombe industrial park as well as for irrigation farming. He commended the Federal Ministry of Water Resources for recently awarding the contract through thr Transforming Irrigation Management in Nigeria, TRIMMING irrigational facilities.

“Mr President is fully aware that Gombe State is putting up an industrial park which is likely going to take off by the end of the year and with this we hope to attract investors who will come and join us and put up agro allied industries so that the whole value Chain of Agriculture can be harnessed for the benefit of the people”.

On his administration’s flagship projects of network eleven hundred and Gombe Goes Green 3G, Governor Inuwa Yahaya said prior to his assumption into office as Governor of the State, he recognized that one of the fundamental challenges of the people was road inter connectivity to link communities and Local Government headquarters as well as the State capital.

He said it was for this reason that his administration initiated the ‘network eleven hundred’ to build at least one hundred kilometres of road in each Local Government Area of the State so as to Open up the state for the free movement of human, goods and services.

“You see eighty percent of our people are peasants farmers so if we are able to link them up with the ‘network eleven hundred’ which intends to put up one hundred kilometres of road in each Local Government Area of the State, we would have succeeded in easing the stress of our people and so far I can say we are doing well because at the moment there are projects going on in all the Local Government areas of the State aiming at achieving the target”.

Governor Inuwa Yahaya said the Gombe Goes Green 3G project was borne out of his administration’s desire to regenerate the environment which is at the mercy of desertification and poor land utilisation.

He said a lot of the State forest reserves have been depleted due to poor agricultural practices which has become incumbent on his administration to provide vegetational cover through reforestation to protect the soil and provide shade for plants and animals.

“With the Gombe Goes Green project, we aim to achieve two to three things that is by planting trees we have provided engagement to the youth who are already working in conjunction with YESSO and the economic trees also being planted side by side will be beneficial to the people in the long run”.

The Governor said the State has been playing a comforting role housing those fleeing the boko Haram and other crisis within the North East sub-region, describing the development as putting a strain on the State educational, Social and environmental standards.

He said his administration has been in constant touch with the Federal Government on how best to manage issues relating to security in the State in view of the current status of the State which is now home to individuals whose identity and capacity to commit crime is not known.

“Those that have been displaced by insurgency have resettled amongst our people. As far as the issue of displaced persons are concerned, neigbhouring Borno and Yobe, we have an arrangement for them to settle with our people, so we don’t have IDPS camps per say. So, the people have acclimatized and have gotten used to living with our people and they are doing very well.”

On the recent flood disaster that ravaged most part of the country, Governor Inuwa Yahaya described the case of Gombe as unique in view of its geographical location which situates it in a valley, appealing to the Federal Government to come to the aid of Gombe State in tackling the menace of gullies threatening lives and means of livelihood.

“The issue of recent flood that has been affecting the whole country. Much as we don’t have rivers around Gombe but the flood around the river banks of Gongola, which is covering two of the local government areas has equally affected us and also resettlement of most of our people.

“But most importantly, because Gombe is situated between valley and because of poor practices and lack of proper environmental management, gullies have developed.

“You might have seen in the last few weeks, the effect of gully erosion in Gombe state. So, erosional upset has really devastated the lives of our people and has really become a problem and there is need for us to seek support from the federal government.

“As at the moment, there are 200 active gullies in Gombe which has affected the lives and livelihoods of a lot our people. So, we brought that to the notice to Mr. President for him to see how best he could attend and render some help especially from the ministry of environment, and more importantly, through the federal government’s understanding with the World Bank via the Nigeria Erosion and Watershed Management Project which Gombe has keyed into.

“Once we are able to get that, we hope our problem of gully erosions will be solved partially if not fully. “

On the number of people displaced by flood, the governor remarked that over 3,200 families have been displaced, saying that government is trying to provide them with alternatives.

He explained: “Of recent, in two local governments we had about 3,200 families that have been dislocated. But we have been trying to provide alternatives.

“At the moment, we are designing layouts from which we will relocate all resettlements that are on flood planes and on gullies which are normally susceptible to floods.

The Gombe Governor said he used his visit to show solidarity to the President over the way he has handled the covid-19 pandemic as well as other state matters.