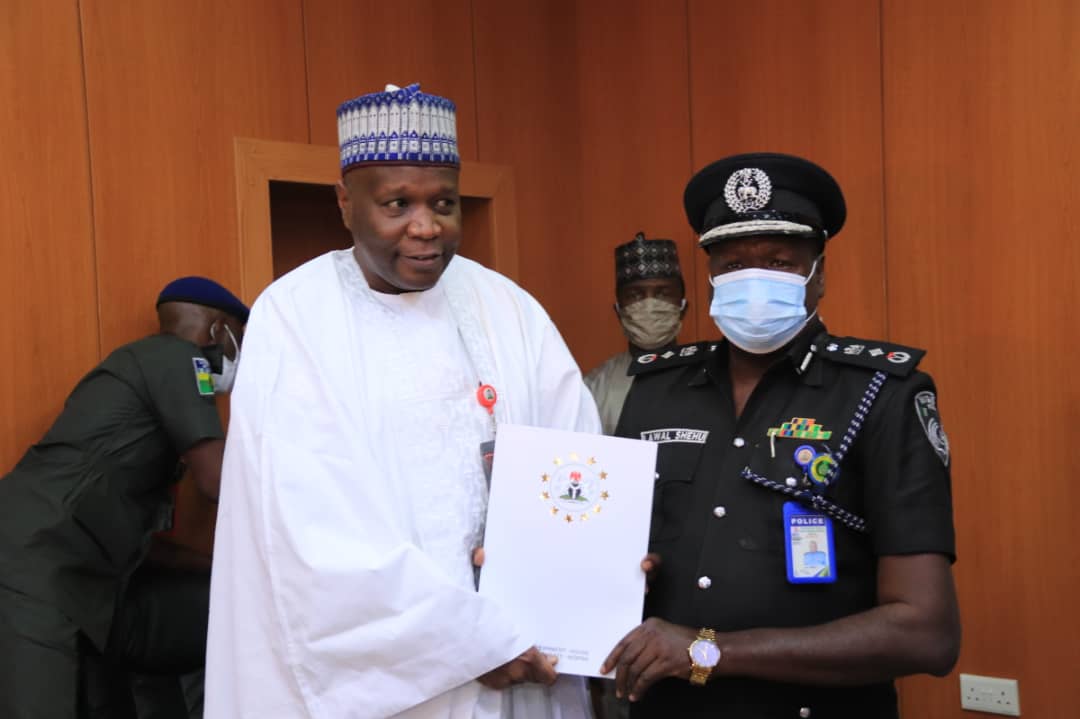 …As Gombe Governor Assures of Continued Support to Security Agencies

Gombe State Governor, Alhaji Muhammadu Inuwa Yahaya has again reiterated his administration’s commitment to work in partnership with security agencies in order to achieve Government’s primary responsibility of protecting lives and property of the citizenry.

Governor Inuwa Yahaya gave the assurance when he granted audience to the Inspector General of Police Mohammed Adamu, who was represented by the Deputy Inspector General of Police, in charge of Training and Development, DIG Lawal Shehu who was in Gombe to appreciate the government and people of the state for donating a school facility in Dukku Local Government Area of the State to be used as a police tactical operations training school.

The school is to serve as a training centre for the Special Protection Unit( SPU), Counter Terrorism Unit( CTU) and Border Patrol.

The Governor described the synergy between the Gombe State Government and the Nigerian Police in setting up the training school as a strategic move that will improve security in the State and the country as a whole.

He observed that security has been one of the greatest challenges confronting the country but was however quick to thank the Almighty God for sparing the State from the security problem rocking contiguous states to Gombe.

“Down here in Gombe God has made it possible for us to live in peace for so long to the extent that we are now a sanctuary to those displaced by insecurity in the neighbouring states”.

Governor Yahaya said, “the mutual understanding and relationship created over the years facilitated the choice of Gombe State as God has been faithful and kind to us that we have not witnessed worst security challenges in the state despite our centrality and proximity with neighbouring states like Borno, Yobe, Adamawa”.

He further explained that the inflow of internally displaced persons (IDPs) due to the relative peace from insecurity challenged states from the Northeast region has not reached beyond the control of the Government and security agencies in the state because all hands are on decks in fighting any criminal elements in the state.

He said the recent anti-SARS protest across the country which eventually led to vandalism as well as looting of Government and private property and assets demands that Governments at all levels must do more to support security agencies in order to fulfil their constitutional responsibility.

“In Gombe, we didn’t have much serious challenge not because we are not part of the country but because we are very conscious of the need for us to live in peace and harmony, so God made it possible for us to contain our youths so instead of end SARS our own was pro-SARS, security and Government”.

He said his administration, with support from members of the national assembly from the State, will continue to support the Nigerian Police as evident in the donation of a School in Dukku to be converted to a training facility for the Nigerian Police.

Governor Inuwa Yahaya expressed optimism that with the conversion of the School which has been lying fallow for years into a Police training school, the capacity of Police personnel will be enhanced while boosting the security of the people of Dukku, its environs and the State as a whole.

DIG Lawal Shehu thanked Governor Muhammadu Inuwa Yahaya for his gesture to the Nigerian Police, saying it takes a security-conscious Governor to think in such a manner and direction.

The highlight of the visit was the official handing over of the title documents of the donated facility by the Governor to the DIG.

Governor Muhammadu Inuwa Yahaya later, represented by the Secretary to the Gombe State Government Professor Ibrahim Abubakar Njodi and the Representative of the Inspector General of Police visited the school along Dukku-Darazo road to take a stock of what is on the ground and what needs to be provided for the smooth take-off of the institution.

Others on the entourage during the inspection visit were the Senator representing Gombe North Senatorial District, Senator Saidu Ahmed Alkali, the member representing Dukku/Nafada Federal Constituency, Hon. Aishatu Jibril Dukku, Commissioners and Special Advisers to the Gombe State Governor as well as other top brass of the Nigerian Police.